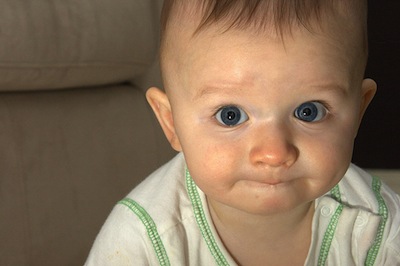 It’s unfortunate that Kate Swift passed away recently, because I’m sure she would have had something to say about the way  the media is covering the story about Kathy Witterick and David Stocker’s child, Storm. Newspapers and blogs have been having a field day with Storm’s parents’ decision to raise their child gender-neutrally, debating whether it’s good for the child, whether it’s a sign of bad parenting and whether a child actually can be raised gender-neutral. What’s clearest is that no one really knows how to handle Storm’s lack of a gender ID: Is Storm “it”, a “child”, “s/he”, or what?

Witterick and Stocker say that they’re determined not to reveal their child’s sex because that knowledge would be used as the foundation for constructing a gender identity. And with gender identity comes what the parents understand as limitations on their child’s capability for an individual identity expression. By leaving the child’s sex unknown to others, the parents hope that Storm will explore roles and behaviors “unconstrained by social norms about males and females” that others may impose on Storm.

This idea is frightening to many, and perhaps it’s compounded by our inability to use the English language when talking about those who step outside our common understanding of gender. Our pronouns are based on the binary of she/he–which becomes a problem when people do not conform to the sex-binary and gender-binary of male/female and man/woman. So how can we, as journalists and human beings in a society that still has a hard time understanding the difference between sex and gender, treat Storm’s identity with respect?

For one, we can use more flexible pronouns. Kate Swift was known for her revolutionary idea to change “singular sexist pronouns into plural gender-free ones.” Along with Casey Miller, she devised the gender-neutral terms “‘tey’ (she/he), ‘ter’ (her/his) and ‘tem’ (her/him)/” Other pronoun systems have been invented since: Spivak, ze/zir, zhe/zhir/zhim, ne, and the list goes on.

Spivak pronouns were popularized by Michael Spivak, a mathematician who used the pronouns in his textbooks. He, however, does not know where the pronouns themselves originated. He wrote:

I think I read about it in a newspaper clipping, perhaps from the Boston Globe, during the time I taught at Brandeis, and I believe it was credited to an anthropologist; later on, when I wanted to use it, I was unable to locate the source.

Ze/zir is thought to have originated in the 1980’s in the science-fiction community, with many variants. Swift’s idea has been taken a step further with these pronouns, as they can be used not only to refer simultaneously to “she” and “he”, but can also be used as a preferred gender pronoun for individuals who do not identify with either gender. “They” as a singular, gender-neutral pronoun is another possibility although it is met with stylistic criticism.

It’s astounding that these pronouns have been around for so long and yet so few people have adopted them. Many of the gender-neutral pronouns are chosen as a form of personal gender expression, and diversity is hard to standardize. Also, the communities that have used them historically are small and isolated.

Nonetheless, although gender-neutral pronouns may be imperfect and are still developing, they may be the best resource for treating gender-neutral persons with respect. Reverting to “it”–as many people have done–makes Storm an object rather than a subject. Although we don’t know which gender Storm will want to identify with–or if Storm will identify with a gender at all–we know that this child is a human being who deserves to be treated with respect and decency, starting with our language.