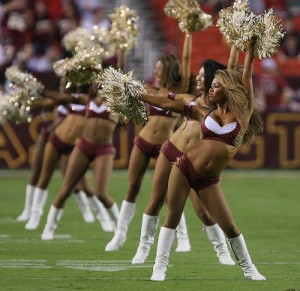 At TBD, Amanda Hess investigates the shockingly low pay ($75 a game) Washington Redskins Cheerleaders make in exchange for their hard work–particularly in contrast to the salary of the players, who are currently embroiled in an ongoing labor dispute with the league. Hess explains:

At the table are the players, the former players, and the owners, all of whom are fighting to get even richer.

And the cheerleaders? Well, whatever all the men decide, they’ll be ready to lose out on plenty of money for the privilege of smiling about it all.

Meanwhile, Kansas Republican state Rep. Pete DeGraaf compared getting raped to getting a flat tire. During a discussion on the Kansas House floor about a bill to ban insurance companies from covering abortion, a fellow Republican asked DeGraaf if the bill would force women to buy abortion-only insurance policies in advance of unwanted pregnancies caused by a rape or other crisis. His response? “I have a spare tire on my car. … I also have life insurance. I have a lot of things that I plan ahead for.” (Hopefully making an ass out of himself is one of them.) At Pandagon, Amanda Marcotte opines on the obliviousness required to make such a comparison, and at Mother Jones, Jen Phillips provides a Venn Diagram to help Rep. DeGraaf understand the many differences between rape and a flat tire.

And is America ready for two women to be serious contenders for a major party’s presidential nomination? How about if those candidates are Michelle Bachmann and Sarah Palin? We may be about to find out. Salon has more on how these two conservative culture warriors could make history in 2012.

From Jezebel: A moving, powerful, emotional, and completely upsetting-yet-absolute-must-see clip from the upcoming documentary Dark Girls, which explores “the deep-seated biases and attitudes about skin color—particularly dark skinned women, outside of and within the Black American culture.”

Finally, “What Proof Does a Woman Have to Have?” The New York Times reports on the astonishing not-guilty verdict handed down this week in the case of two New York City police officers who were charged with raping an intoxicated woman whom they were supposed to have escorted home safely. Change.org has more, including ways to take action.

Above: Washington Redskins cheerleaders during a game against the New England Patriots. Photo courtesy of Flickr user Keith Allison under CC 2.o.