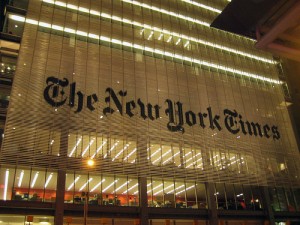 We’re cheering and high-fiving in the Ms. offices this morning over the news that Jill Abramson has been appointed executive editor of The New York Times–the newspaper’s top editorial position. That’s quite a leap forward for a publication which, just seven years ago, was chided for still being a “man’s world,” with only 32 percent of its reporters being women, and few of those women getting their stories placed on the prime pages of the paper.

Abramson, who has been the paper’s news managing editor since 2003, has written a book on Clarence Thomas and the Anita Hill hearings, and more recently wrote a Times article on gender and racial representation in the judiciary .

Here’s what Ms. publisher Eleanor Smeal had to say about her ceiling-breaking appointment:

The selection of Jill Abramson, an accomplished feminist, as executive editor of The New York Times, which is not only the most influential newspaper in the United States but also the premier online news platform, smashes a barrier to women’s achievement in print and digital media.

This is all the more important because it comes at a time when women’s rights are under attack in Congress and state legislatures. Additionally, women are still only one-third of executive editors and one-fifth of presidents, publishers and CEOs of major U.S. newspapers. Globally, women hold only 27 percent of top news management positions. Hopefully the elevation of Abramson to the pinnacle of The New York Times will spur the advancement of women in management throughout the industry.

While we’re honoring top women in media, we’d also like to give a belated shout out to former Ms. editor Martha Nelson, who has been named editorial director at Time Inc., which makes her responsible for all of the media empire’s entertainment, fashion and lifestyle magazines. Nelson was previously the top editor at InStyle and People, then oversaw the division of Time Inc. that included those magazines and others. Her new position, says The New York Times, “signals a clear line of succession should the editor in chief, John Huey, choose to retire.”

Women running the media: That’s how we like it!