Dear NBC and ABC: I've Seen "Mad Men," And Your Shows Are No "Mad Men" - Ms. Magazine
Skip to content 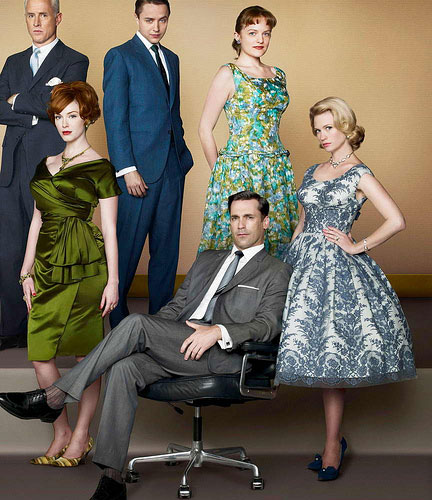 An ad in the new Entertainment Weekly proudly proclaims a feminist slant for one of NBC’s most touted fall dramas: The Playboy Club, on the 1960s’ birth of Hugh Hefner’s empire. In an accompanying “interview,” lead actor Laura Benanti elaborates:

These ladies were making more money than their fathers, putting themselves through school, running away from abusive relationships … they were empowered.

It’s true that since the founding of the Playboy clubs in the early 1960s, feminists have debated both their merits and their regressiveness. The positives were, yes, that women now had new options to earn high salaries and redefine themselves. The negatives, which Gloria Steinem so well chronicled in her classic 1963 undercover expose (which became a 1985 movie starring Kirstie Alley), were numerous: costumes so tight a sneeze could split them, demerits for offenses like having a “scruffy tail,” policing by undercover detectives, and constant exhortations to be “friendly” and pleasing to male customers. Overall, Steinem described an operation that was all about the men, with women degraded and treated as pure sex objects.

Like its ABC counterpart Pan Am, which features the adventures of 1960’s stewardesses, NBC’s The Playboy Club was likely inspired by the success of AMC’s break-out series Mad Men. As Mad Men explored the role of the office secretary, these go to town on the other iconic much-fantasized-about women’s professions of the era: the cocktail waitress and the flight attendant.

But, from what I’ve seen in previews on TV and in print, these shows pale in comparison to Mad Men. They appear to strive for all the smooth surface style, but for none of the socially critical content.

In portraying women’s roles of the early to mid 1960s, Mad Men consistently comes from an ironic point of view. Its happy-on-the-surface women characters face a lack of real choices. Feminist writers, including myself, have expounded since its first season how this show is more effective than any women’s studies class in dramatizing the stifling oppression of the era. This is especially true as the female characters age past their sex-symbol expiration dates of their 20s.

Don Draper’s 30-ish wife (who divorced him last season) Betty (January Jones), formerly a glamorous New York City fashion model, is hopelessly bored at home, to the point where she seeks the help of a psychiatrist. The shamelessly worldly and buxom office secretary Joan Holloway (Christina Hendricks), who seems to be using Helen Gurley Brown’s Sex and the Single Girl as a lifestyle manual, regularly suffers awkward fallout from her office affairs. That includes the uncomfortable silence with her boss after a hotel rendezvous as they both wait for cabs in the rain. Her swinging lifestyle suddenly looks desperate as she turns 30, when she resorts to marrying a jerky doctor, who rapes her in a fit of jealousy. While she is much more intelligent, it is he who goes to medical school and carries the status in the relationship.

The other main female character, Peggy Olson (Elisabeth Moss), does manage to graduate from the secretarial pool to the copy editor’s desk. But along the way she faces countless humiliations, such as having to conceal an accidental pregnancy and shamefully putting up her son for adoption.

Will Pan Am and The Playboy Club follow in Mad Men‘s footsteps and reveal some of the true complexity of the times? Or will they be just shameless Frank Sinatra-soundtracked jigglefests? All I know is that now is probably not the time now to cancel my cable subscription to AMC.

“The Glorias” Film Explores The Many Faces of Gloria Steinem