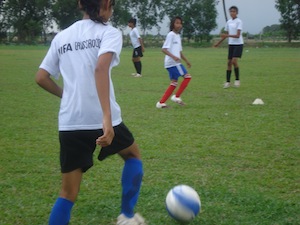 It was Wednesday and the Mighty Girls had practice again. The late afternoon sun beat down on the field in Battambang, a charming river town of 250,000 that is Cambodia’s second-largest city. A group of guys had assembled along the sidelines, menacingly close to the goal. They looked on while the girls ran drills and then began to scrimmage. They whooped, hollered and heckled.

For girls to play football (soccer) in Cambodia is to challenge nearly everything it means to be a woman; it means invading the all-boys club that is Cambodian football. But the girls were unfazed, taking to the field with knitted brows, passing nimbly and running drills. The backs of their shirts say, “We’re the Mighty Girls!”

They’re used to this–used to being told they can’t play, or shouldn’t, or aren’t as good as the boys. Girls’ football in Cambodia, still an emerging phenomenon, has less funding, fewer practice resources, fewer training opportunities and scant community support compared to boys’ teams.

SALT Academy (Sports and Leadership Training), a Battambang-based community football organization, started the ball rolling with girls’ teams a few years ago–pretty much because community members thought the idea was so preposterous. Khmer girls are supposed to be gentle, reserved and obedient, so they can grow up to be good Khmer women. Playing football is like throwing a monkey wrench into this, but one that more and more girls and women want to throw.

After fostering the start-up of dozens of girls’ teams across the region, SALT assembled the Mighty Girls six months ago–a permanent select team and empowerment program for girls. The Mighty Girls includes some of the most promising female football players in the country; they’ve earned the opportunity to further their academic studies while still training competitively, especially those who lack the financial resources to continue their education otherwise.

I had the opportunity to spend two inspiring weeks with these girls recently. Being not-so-sporty myself, I thought their sheer skill on the field was awesome. But more than that, their steadfastness to do something that so many people say they can’t or shouldn’t is totally kick-ass. I have to put this in perspective: These girls are, in fact, the most senior women’s football players the Kingdom of Cambodia has. There is no Mia Hamm in Cambodia, but in a few years, with the right training and opportunities, these girls will become the next Mia Hamms.

The Mighty Girls don’t pay the menacing boys on the sideline any mind; they’re used to the adversity. In fact, nearly all of the Mighty Girls have come from places of great disadvantage–orphaned, trafficked or impoverished–and have grown up being told what they can’t do or what they don’t deserve. One Mighty Girl, also an assistant coach for a younger girls’ team, was held hostage as a domestic servant in Thailand along with her younger sister before escaping–on foot–back to her home.

This week in Vietnam there will be one more watershed event for girls’ football in Cambodia: An under-14 team, assembled from more than 50 national invitees, heads to Ho Chih Min City to join the Asian Football Confederation’s (AFC) U-14 Festival of Football. This group, which includes five Mighty Girls team, will be the first women ever to represent the kingdom of Cambodia at an official AFC or FIFA event. The festival is a youth development event where young players can hone their game with highly skilled players from countries throughout the Asia region. Some of the team members had never even been to Cambodia’s capital before, let alone out of the country.

Thirty-nine years after Title IX passed in the U.S., we can see the vast importance of sports involvement for women. The benefits for girls in Cambodia are likewise numerous and far-reaching; they’re just a few decades behind. But here’s to wins in Vietnam, and many more victories to come.

Photo of the Mighty Girls practicing courtesy of Jessica Mack