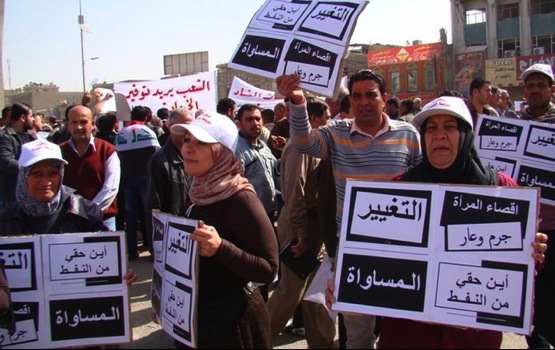 In Baghdad’s Tahrir Square on Friday, four women participating in a pro-democracy demonstration were molested and beaten by government-sponsored protesters who swarmed the square. Those assaulted were a part of a 25-woman delegation from the Organization of Women’s Freedom in Iraq, the country’s leading women’s rights group, there to create a visible women’s presence in the pro-democracy movement. OWFI Director Yanar Mohammed explains:

Iraq is still a post-conflict state where women are vulnerable. Almost 80 percent of the women veil in Iraq out of fear. There are women who still do not dare to leave the house to go to work. In some places, demonstrations are all men. But OWFI is always in Tahrir Square on Fridays to give a female face to the demonstrations.

To the list of pro-democracy demands–jobs, electricity, drinking water, fair elections and an end to corruption–OWFI demonstrators add one more: women’s freedom.

Tensions were high surrounding Friday’s protest. June 6 marked the end of a 100-day period during which Iraqi Prime Minister Nouri Al-Maliki had promised to enact reforms, following a February 25th “Day of Rage” in which more thousands of pro-democracy protesters marched in Baghdad. But access to water and electricity had only grown worse during the 100 days, says Mohammed. Nor did a promised investigation of corrupt officials take place.

Entering the square on Friday, the pro-democracy protesters, numbering in the hundreds, noticed an unusual sparsity of uniformed security forces–though bags were still searched for weapons. Then a fleet of air-conditioned buses arrived, carrying thousands of men in traditional Arab tribal dress. Says Mohammed,

The prime minister had been meeting with them in the week before. There were also athletic men in expensive plain clothes. They had knives; one had a gun with a silencer, which has been the weapon of choice in a recent outbreak of assassinations.

OWFI member Jannat Basim, 28, described to the Los Angeles Times what happened next:

We were about 10 women standing on the same place we used to stand each Friday carrying our signs, the same we carry every week. After about two minutes, a person came to us, I can describe him as pro-government person, and asked us to leave that place because it is for the people supporting Nouri Al-Maliki.

We refused to withdraw. This man was wearing a black shirt; then three persons in plainclothes came with him. After we refused, one of them pulled one of the signs we were carrying and started to hit us with it.

According to OWFI, six or seven pro-government men surrounded each of four women, groped the length of their bodies, including their genitals, threw them down and beat and kicked them. They called the women “prostitutes” and “communists.”

The youngest woman, not yet 19, was targeted by a group of men who shoved her face-first to the ground, breaking her tooth, and began to tear at her clothes. Seeing this, a group of young men affiliated with OWFI rushed to her aid, giving the four women a chance to escape. Mohammed described the women as “very tough”:

They went straight to a Human Rights Watch representative to report what happened. Then they scheduled a press conference for Sunday. If you are an outspoken feminist in Iraq these days and you are demonstrating in Tahrir Square, you have actually no protection. So media is the best protection.

But she is furious at the intimidation tactics of the government:

It took us so many years to get women involved in the political struggle. And they went down to the Square to demand what they really want. And the prime minister decides to send these women home in what he knows is the best way, the most humiliating way. When the humiliation is sexual, in a society like Iraq, they know it will break the women.

One of the attacked women–who became involved with OWFI after taking refuge in its network of women’s shelters–says she was not intimidated by the beating. What shook her was returning home to find her house had been broken into and her laptop gone, while her gold and jewelry remained–suggesting that the thieves’ motivation was political, not monetary.

Mohammed has a message for Americans:

Even if the U.S. intervention that happened before–the military intervention–has destroyed our lives, we need a civilian intervention now. We need the American people to support and empower us again so we can take matters into our own hands and hold free elections.

To aid OWFI and other pro-democracy forces, write or call your member of Congress. Ask them to investigate why government-sponsored forces are attacking peaceful women’s rights activists in Baghdad, and demand that the U.S. support women’s rights in Iraq. You can also write Secretary of State Hillary Clinton, who has made democracy and women’s rights top foreign-policy concerns, especially in the Arab world.

You can sign MADRE’s letter condemning the attacks by emailing your name to madre@madre.org.

Photo from a previous OWFI demonstration in Tahrir Square, courtesy of OWFI.