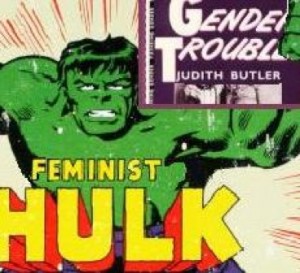 When we last checked in with our big green superhero friend, Feminist Hulk, in his first-ever interview last June (one of the most viewed posts on the Ms. Blog 0f 2010), he was just learning to flex his muscles in the Twittersphere. But his feminist superpowers were mighty and growing stronger ever day. Now, with 40,000 followers and counting, Feminist Hulk is a patriarchy-smashing force to be reckoned with, commenting on current events and social justice issues in condensed, all-caps mega-Tweets.

We’ve learned a lot about Hulk in the past year.

He dislikes: the gender binary, interlocking forms of oppression and Donald Trump‘s short run for president.

HULK NOT SMASH PEOPLE, SO NOT SMASH TRUMP. HULK SMASH FOUNDATION OF BULLSHIT ELITISM AND WHITE PRIVILEGE TRUMP STAND ON!

We caught up with Feminist Hulk and his “literary life-partner J” somewhere in cyberspace shortly after he Tweeted about the challenges of getting a message across in 140 characters:

Because Ms. and the Ms. Blog are all about liberation, we’re giving Hulk–and J–yet another chance to break free of the Twitter-stream and tell us what’s on their mind(s). At the end of our interview, J surprised us by announcing plans to reveal Feminist Hulk’s true identity–in yet another Ms. Blog exclusive interview–later this summer.

Ms.: How has your life changed in the past year as a result of your growing audience and influence?

Hulk: HULK IN AWE OF WAVES OF LOVING SMASH. HULK BATHE IN JOY OF HUGE FEMINIST COMMUNITY. SWIM IN CROSS-CURRENTS OF ANTI-HEGEMONIC DIALOGUE. THEN DRY HAIR AND WALK TO GROCERY CO-OP.

J: Honestly, I was more freaked out when Hulk had 1,000 followers than I am on the far side of 40,000. I realized pretty quickly that this isn’t about me, and it isn’t even about Hulk; it’s about the thousands of people who’ve chosen, for whatever reason, to read us. I’m proud to have been invited into their day.

Ms.: What have been your proudest moments over the past year?

H: HULK STILL SO EXCITED ABOUT FOLLOWERS THAT HULK FEEL INSPIRED TO WRITE POEM. HULK LEAVE THIS QUESTION TO J.

J: The single tweet that I’m most proud of was Hulk’s response to the Julian Assange case, particularly the first two words: “AS SURVIVOR.”

While there is definitely some crossover between Hulk’s life and mine (we both do yoga, smash patriarchy and bake vegan scones), this was the most personal piece of information I’ve used to inform Feminist Hulk. I was floored to see just how many people responded to it warmly. I think it was retweeted more than anything else Hulk has done. I wish that every survivor could have the experience of coming out to a cheering audience of thousands.

Ms.: What did you think of finding yourself in Amanda Palmer‘s “Most Amusing Tweets of the Year” song?

H: HULK DEFINITELY NOT AS FUNNY AS KANYE. NOT SURE WHAT THAT SAY ABOUT HULK.

J: I’d known that Palmer was following Hulk (I assume she got turned onto it by Neil Gaiman, who started following really early on), but the song blew my mind. Hulk was humming it for days afterward.

J: Did Hulk finish his poem?

Ms.: Smashing the gender binary is one of your biggest jobs. How do you respond to people who have trouble getting what this is all about?

J: One tough aspect of writing on Twitter is trying to serve the audience members who’ve been reading for a year as well as those who’ve been reading for a week. This means that a lot of Hulk’s core beliefs, like his feelings about the gender binary, need to be constantly reiterated for new followers, but they need to be expressed in new enough ways that the long-standing followers don’t get bored. It’s a tricky balance, one I continue to work on.

H: FOR HULK, FEMINISM NOT ABOUT SIMPLY REVERSING PATRIARCHY’S TERMS. IT ABOUT RETHINKING THE ROLE THAT PRESCRIBED GENDER PLAYS IN REINFORCING PATRIARCHAL STRUCTURES. THAT NOT MEAN CATEGORIES “MASCULINE” AND “FEMININE” DO NOT DEEPLY IMPACT DAILY LIFE, BUT THAT ANY SYSTEM WHICH GRANT LEGIBILITY TO ONLY SOME LIVES DO INJUSTICE TO ALL LIVES.

H: POETRY OFTEN BRING THAT OUT IN HULK. 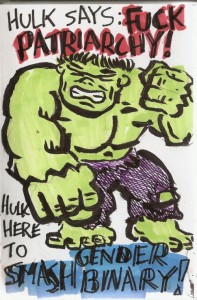 Ms.: What do you do when the trolls come after you?

Ms.: A number of your tweets seek to clarify the difference between smashing patriarchy and injustice and physically attacking individuals (like The Donald, Governor Scott Walker, etc.). Could you say more about this distinction?

H: IT REDUCTIVE TO VIEW SMASH AS ACT OF DESTRUCTION ALONE. IN SMASHING SYSTEMS THAT OPPRESS, WE DESTROY BULLSHIT AND CREATE NEW WORLD OF POSSIBILITY. HULK NOT WANT TO BUILD THAT WORLD ON FOUNDATION OF ANYONE’S PAIN.

Ms.: You Tweeted last year: “HULK SMASH GENDER BINARY TO PUNY, FRAGMENTED BITS (TILL IT HAVE AS LITTLE COHERENCE AS SARAH PALIN’S SPEECHES).” What do you think of Sarah Palin?

J: She asked what you thought of Sarah Palin.

J: It’s important to remember that Republican doesn’t have to equal conservative. Palin is an embarrassment for the many intelligent and dedicated Republicans who are tired of their party’s dependence on the far right. In a year when so much of the GOP’s agenda has appealed to conservatives by stomping on women (whether by trying to defund Planned Parenthood’s ability to offer pap smears–in a redundant effort to limit federal abortion support–or by trying to redefine rape), I think there is no greater sign of this problem than the laughable notion that Palin is the best female candidate they could come up with.

H: AND DON’T EVEN GET HULK STARTED ON TEA PARTY. NOW HULK HAVE TO HOST MONTHLY “FEMINIST CAFFEINATION PARTIES,” BECAUSE OLD NAME MAKE HULK TOO ANGRY TO FINISH BAKING SCONES.

Ms.: Any plans for a Feminist Hulk book, talk show, or maybe a musical?

H: SOMETIMES HULK FANTASIZE ABOUT BEING ON THE DAILY SHOW, BUT PRETTY SURE THEIR CHAIRS ARE TOO SMALL FOR HULK-SIZE GUESTS. HULK NEVER THOUGHT ABOUT MUSICALS–THOUGH HULK LOVE TO WRITE ANTI-PATRIARCHAL SONGS, FEEL UNCOMFORTABLE CONFINING THEM IN NARRATIVE FORM.

J: If the right project came along, I would be game, though I ultimately prefer it to take written form. I love writing in Hulk’s voice, and I like leaving the rest to the audience. Right now, tweeting Hulk fits beautifully into the time constraints of my daily life, though I’m slowly beginning to bring Hulk’s work and J’s work more fully together. In our next interview, I’ll talk more about my life (and identity) outside of Hulk. Stay tuned for Hulk Revealed this August!