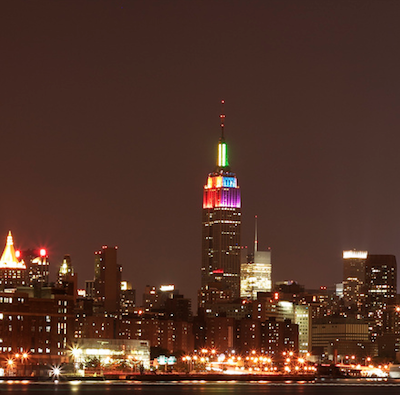 June is almost at its end, which means that we’re coming to the close of June Bride month as well as June Pride Month. Thanks to the 33-29 passage of a gay marriage bill in New York this past Friday, the two have become rather synonymous for those lesbians (and gay men and other queer folk) in the state who would like to marry–which they’ll be able to do come July 24.

During the suspense-filled week before the gay-marriage victory, New York state senators had been arguing back and forth about the language of the bill. One senator, Republican Greg Ball, even opened up his decision-making process to Twitter (he ultimately voted “no”). Republican Sen. Roy J. McDonald grew so sick of the dragged-out debate that he decided to vote “yes,” saying:

Certainly the passing of the bill, which was signed into law by Gov. Andrew Cuomo, has reignited the hope that New York will mark a tipping point for gay rights across the country. Maybe more states will fall in line behind the notion that marriage is a right rather than a privilege, and thus should be available without discrimination. But the fact is, there are many battles left to be fought and won.

In California, same-sex marriage still isn’t legal, despite positive court rulings, including one against the Defense of Marriage Act (DOMA) in bankruptcy court. Twenty U.S. bankruptcy judges in Los Angeles signed on to a decision that DOMA violates the 5th Amendment’s guarantee of equal protection.

The case involved two gay men who had married when it was briefly legal for them to do so in California in 2008. But when they wanted to jointly file for bankruptcy protection earlier this year, the U.S. Trustee in L.A. wanted to throw out their filing because of DOMA’s prohibition of same-sex marriage. Instead, the bankruptcy judges threw out DOMA, declaring it unconstitutional.

Enacted in a burst of bipartisan poltroonery in 1996, DOMA was drafted by the twice-divorced Rep. Bob Barr (R-Ga.) and voted in by a huge majority that included such accused or admitted adulterers as Robert Livingston (R-La.) and Gary Condit (D-Ceres). DOMA was signed into law by (wait for it) … Bill Clinton.

Whatever arguments were used back then have become less and less defensible, though. As Hiltzik put it,

[N]ow that same-sex couples have become integrated into the economic life of the country, the points of discrimination against them, petty or grand, have begun to melt away.

Many politicians seemed to be realizing this, begrudgingly or not. The victories are mounting up, although the movement for gay civil rights will undoubtedly continue to face challenge upon challenge–much like the woman’s suffrage movement did. We just have to keep urging politicians like Sen. McDonald to cross ideological lines and vote for what is right and, seemingly, inevitable. Like Bob Dylan wrote and sang, “Come senators, congressmen, please heed the call / Don’t stand in the doorway, don’t block up the hall.”