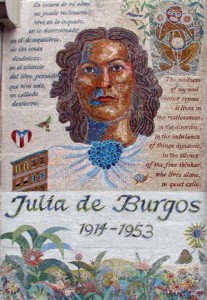 On July 5, 1953, in the early morning hours, two New York City police officers spotted a figure lying unconscious in the street near the corner of 5th Avenue and 106th St. in East Harlem. As they approached, they saw it was a towering woman, 5 feet 10 inches, with bronze-colored skin. They rushed her to Harlem Hospital, but she died shortly after midnight of pneumonia–probably exacerbated by the fact that she was an alcoholic with cirrhosis of the liver.

The woman was not carrying a handbag and had no form of identification on her. No one came to the morgue to claim her body. No missing person’s report fit her description. So she was buried in a potter’s field in New York City. Finally, a month later, the woman was identified as award-winning Puerto Rican poet Julia de Burgos, and in August of that year her family and friends had her body exhumed and repatriated.

Nearly 60 years after her death, it’s time to identify her again: this time as a role model for contemporary Latina feminist writers and visual artists.

Julia Constanza Burgos García was born on February 17, 1914 in the town of Carolina, the eldest of thirteen children. Although her family’s poverty made it difficult for her to attend college, she persevered and graduated from the University of Puerto Rico with a two-year teaching certification in 1933. She participated actively in both the feminist and nationalist movements on the island at the time, while working as a teacher and journalist and publishing her poetry in local literary magazines.

She completed her first poetry collection by 1935, entitled Poemas exactas a mi misma (Poems to Myself). But she considered the collection juvenilia and refused to publish it and saved only one poem from this collection–“Río Grande de Loíza” (Great Loiza River), which remains one of her best-known. “Río Grande de Loíza” praises the landscape of her home island while remembering the legacy of conquest and slavery that marks Puerto Rico. She included this poem in her second collection, Poema en veinte surcos (Poem in twenty furrows), published in 1938.  That collection explores equally themes of social justice and women’s rights, establishing de Burgos as an anti-imperial, anti-colonial feminist. Canción de la verdad sencilla (Song of the Simple Truth), published in 1939, won the Literary Prize from the Ateneo Puertorriqueño, the leading Puerto Rican cultural institution of the time.

By the time Julia de Burgos left Puerto Rico for New York on January 18, 1940, with no plans to return, she had already written three collections of poetry and published two. She had been married and divorced. “I want to be universal,” she exclaimed in a letter to her sister, Consuelo, shortly after her arrival in New York.  She stayed there for only a short time before moving to Cuba for a couple of years, then returned to New York only to struggle to earn a living as a writer because of racial, ethnic and linguistic discrimination. She did publish her work in local Spanish-language newspapers and worked as the art and culture editor of Pueblos Hispanos, a New York-based newspaper that promoted progressive social and political causes, including Puerto Rican independence. She was awarded by El Instituto de Literatura Puertorriqueña in 1946 for her essay “Ser o no ser es la divisa” (To Be or Not To Be Is the Motto), in which she advocated for Puerto Rican independence. Her final collection of poetry, El mar y tú (The Sea and You) contains poems that she wrote while in Cuba and New York. It was published posthumously in 1954.

De Burgos was an ambitious and brilliant woman who worked diligently on two fronts—to establish herself as a writer of international acclaim and to eradicate injustice. Her feminist politics and her Afro-Caribbean ideas allow us to read her as a precursor to contemporary U.S. Latina/o writers.  While it is rare for a poet to become a cultural icon, she has evoked feelings of bonding and identification in Puerto Ricans and Latina/os in the U.S. for more than half a century. Many U.S.-based Latina artists and writers embrace her legacy, such as Mariposa, Andrea Arroyo, Luzma Umpierre, Rosario Ferré and Yasmin Hernandez. Nuyorican poet Sandra María Esteves notes that de Burgos represents,

all of those women, like my own mother, who migrated to New York in the early part of the century in search of a better life, only to be confronted with a different reality.

Julia De Burgos’ life has captured the imagination of many and has been recounted in numerous works of visual art, short stories, ballets, articles, books, plays and music. While the tragic-victim narrative has often predominated, she is, like many other Puerto Rican women who migrated to New York, too complex and multifacted to be contained within such a limited framework. Moreover, we can remember her as part of the tradition of resistance on the island of Puerto Rico, as well as a champion for civil rights in the United States.

Vanessa Pérez Rosario is Assistant Professor of Puerto Rican and Latino Studies at Brooklyn College, City University of New York. She earned a Ph.D. in Comparative Literature from the University of California, Davis in 2007. She is the editor of Hispanic Caribbean Literature of Migration: Narratives of Displacement (Palgrave 2010). She recently completed a manuscript titled Becoming Julia de Burgos: Feminism, Transnationalism, Diaspora. She was a Woodrow Wilson Fellow in the Department of Social and Cultural Analysis at New York University and a Post-Doctoral Fellow at the Center for Puerto Rican Studies at Hunter College, City University of New York. She is the recipient of numerous grants and awards including the American Association of University Women Publications Grant and the National Council for Teachers of English 2011 Early Career Educator of Color Leadership Award. Her research and teaching interests include U.S./Third World Feminism, Transnational Feminism, Latina/o Studies and Caribbean Studies. As a member of the Northeast Regional Board of the National Latina/o Education Research and Policy Project, she is committed to improving the educational experiences of Latina/os in the United States.