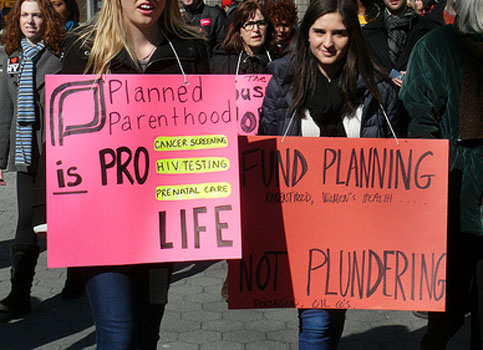 It seems some Republican lawmakers oppose not only abortion, but ways to prevent abortion as well. Last week, New Hampshire’s all-Republican executive council canceled the state’s contract with Planned Parenthood of Northern New England (PPNNE), cutting $1.8 million in funding for the state’s six clinics. Since the cut, clinics have stopped dispensing contraceptives. Planned Parenthood representatives estimate the cuts will affect an average of 120 New Hampshire women each day. And that’s not all: “If this funding isn’t restored we… may have to start closing centers,” said PPNNE spokesperson Jennifer Frizzel to Reuters.

Critics of the decision are most concerned about access to contraception for New Hampshire’s low-income women. In 2010, PPNNE provided low-cost contraceptives to 13,242 women. Through Planned Parenthood, a woman could buy birth control on a sliding scale based on income, for an average of $5. For many, it was free. Now, those women will have to get prescriptions filled at regular pharmacies, paying anywhere from $40 to $100.

That is, if they continue to take birth control: Up to 70 percent of PPNNE’s patients are without private health insurance, and many have told the center they will no longer be able to afford The Pill, period. The clinics will likely have to cut back on other services as well, including breast exams, STD testing and cervical cancer screenings. PPNNE site manager Amanda Mehegan fears that an annual visit to Planned Parenthood may be many patients only medical attention. “I think a lot of patients really rely on that as their yearly checkup,” she said to the New Hampshire Concord Monitor.

The government contract was 20 percent of PPNNE’s budget. It was canceled because the clinics also offer privately-funded abortion services. Earlier this year, the Republican-controlled legislature attempted the same cut. When they failed, the all-Republican State Executive Council voted 3-2 to sever state funding.

In response, PPNNE has launched a campaign to renew their contract. They’ve also begun an advertising campaign asking the council members to “put women’s health above politics.”

But PPNNE advocates may have a hard battle ahead. Councilman Raymond Wieczorek flippantly told Reuters:

I am opposed to providing condoms to someone. If you want to have a party, have a party but don’t ask me to pay for it.

He echoed this sentiment in an interview with the Concord Monitor: “If they want to have a good time, why not let them pay for it?” Wieczorek apparently thinks sexual health should be a privilege only available to those who can afford it, and New Hampshire’s recent decision enforces just that.