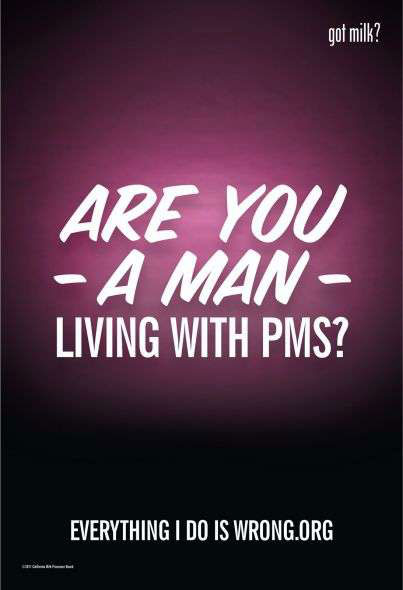 Feminists have been up in arms in recent weeks over the California Milk Processor Board campaign that trots out stereotypes of PMS-ing “psycho-bitches” and “insensitive men” in order to sell milk as a PMS cure. Throughout the online feminist world, we’ve been calling them out on their sexism (check out great posts at Feministing, Jezebel and Bitch). Now it seems our voices have been heard–sort of.

The milk ad website, formerly everythingidoiswrong.org (referring to those poor straight men who have to deal with a crazy wife or girlfriend while she’s on her period), has been pulled down and traffic redirected to gotdiscussion.org (a throwback to the Milk Board’s famous “got milk?” campaign). Where posters of harassed-looking men carrying cartons of milk used to be, now are speech bubbles quoting various news sites that either criticize or defend the ad campaign.

While the site links to Jezebel’s critique and provides a forum for discussion on Facebook and Twitter, the Milk Board is still getting a few things wrong.

Okay, more than a few things.

Namely, the URL change is serving as a flimsy stand-in for a real apology and a real end to the campaign. While discussion is certainly healthy, the Milk Board is still using this campaign to sell its product–now it’s just using the controversy rather than the ads themselves.

Not to mention that the Milk Board is acting agnostic about whether or not the ads are sexist. This means the discussion is extremely open-ended–and without a moderator, or even a leading question, I fear the Facebook page will create room for an onslaught of more sexism.

Worst of all, the Milk Board seems to think that its change of heart merits a pat on the back. Executive Director of the Milk Board, Steve James said to the New York Times,

[The goal now is] to turn down the heat. There’s no sense in keeping up a Web site that’s like waving a red flag to some people. Taking down everythingidoiswrong.org is not a failure in any way. I don’t see it as ending it or pulling the plug. We accomplished what we set out to accomplish.

The truth is, they will still make money from the original campaign, no matter how they spin it. Instead of stepping back to recognize that they’ve resorted to the dirty tactic of “sexism sells,” they’re using sexism-as-controversy to milk more attention.

And while we’re on the subject of attention, what about the Ms. and Change.org petition and all the supporters who signed it? Collectively, we sent more than 9,000 emails of protest to the California Milk Processing Board! Where’s that gold star? Where’s that GotDiscussion speech bubble?

Oh, right. Just knowing our message got through is enough. Thanks to you feminist supporters who signed the petition and helped end another sexist campaign. Now Milk, how about a real apology?