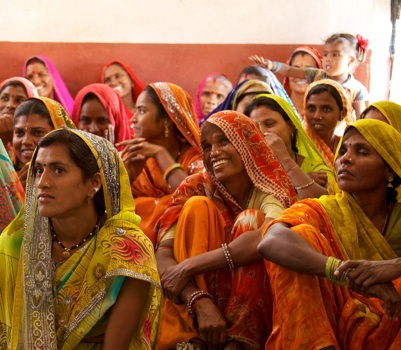 Chances are, you’ll hear or read soon that the world’s population is about to hit 7 billion. Get ready for cool graphics demonstrating its remarkable escalation over the past century, as modern medicine and agricultural advances helped people live longer and societies flourish, while fertility rates remained higher than “replacement level” in much of the world.

Prepare for pictures of thousands riding their bikes in polluted Beijing, hordes of refugees seeking protection from violence in Libya and the Ivory Coast, and starving masses in Somalia and Sudan. Listen for the inevitable calls to control population growth so that we can save our planet from overcrowding and instability.

But think carefully before you buy into the hype and join the simplistic call for limiting family sizes around the world.

Yes, the world’s population continues to grow, and in many places it is growing at unsustainable rates. Far too many communities do not have the desks or books to educate their growing populace of young people. Many regions lack food and water to adequately nourish their residents. As more and more people move into urban districts that are unprepared for them, dangerous slums and settlements are becoming more prevalent. Many rural families rely on firewood for fuel, but forests are diminishing at unprecedented rates as a result of not only local fuel demand but also changing consumption patterns.

Addressing these issues with top-down, numbers-driven approaches, however, has not only proven to be ineffective, it is also decidedly anti-feminist.

In 1994, as the world headed toward a then unrealistic-seeming population of 6 billion, 179 countries came together at the International Conference on Population and Development (ICPD) in Cairo to discuss how to ensure a sustainable, healthy planet. After decades of addressing population growth through demographic approaches and the mass distribution of birth control, the global community–led in large part by feminists who decried such paternalistic approaches in favor of individual rights–embraced a more comprehensive and rights-based notion of sexual and reproductive health. This broader approach included not just family planning but also maternal and infant health, prevention of gender-based violence, empowerment of women and the prevention and treatment of sexually transmitted infections.

The ICPD approach recognized that when individuals and couples have the information and means with which to plan their families, they are more likely to choose to have smaller families. But in the developing world, it would take government support–including funding from industrialized countries–to help meet women’s reproductive needs.

Now, 17 years after the Cairo conference, U.S. investment in international reproductive health continues to be the highest in the world–but it’s nowhere near what we promised in 1994, nor anywhere close to meeting the global need. And while we inch toward achieving some of the Millennium Development Goals (MDGs) to which the international community agreed in 2000, the goals related to women–empowerment (MDG #3) and lowering maternal mortality (MDG #5)–remain among the furthest from our reach.

Some 215 million women in the global South who want to avoid pregnancy are still not using an effective method of contraception–and that’s a conservative estimate, as it only counts married women. Supplies of contraceptives are inadequate and unevenly distributed–often inaccessible due to cost, social stigma and taboos, restrictions and inadequate information. “Many Afghan women know about family planning, birth spacing and contraceptives. They need to have access to them,” says Dr. Suraya Dalil, Afghanistan’s acting minister of public health.

In part as a result of unwanted and early pregnancy, hundreds of thousands of women die each year in pregnancy and childbirth. More than 20 million unsafe abortions take place annually, causing tens of thousands of unnecessary deaths and untold injuries. An estimated 2 million women live with obstetric fistula, a debilitating condition that, if untreated, leaves women–often young women, whose bodies are too immature to give birth safely–incontinent and stigmatized.

Half of the world–more than 3 billion people–lives on less than $2 a day. One in 7 live in hunger and without access to clean, safe drinking water. More than a third of those on the planet lack access to an adequate sanitation facility. As Ms. readers will understand, women and girls suffer most acutely from such deprivation.

Throughout the global South, millions of girls leave school each year to tend to household chores, care for their families and, tragically, to marry too young and give birth. At current rates, over the next decade, an estimated 100 million girls will marry before their 18th birthday–leaving them at great risk of domestic violence, HIV infection and early pregnancy. The latter is the leading cause of death worldwide for females ages 15 to 19.

And while there is promising news globally in lowering rates of new HIV infections and better treatment for those living with AIDS, the United Nations Programme on HIV/AIDS (UNAIDS) recently affirmed that more than half of all people living with HIV are women and girls. In sub-Saharan Africa, young women ages 15 to 24 are as much as eight times more likely than men of that age group to be HIV-positive.

These are daunting numbers, almost as unfathomable as that looming 7 billion figure. But there’s no need to turn away because the scope of the problem is simply too large to comprehend. The fact is, we actually know how to solve these problems. The ICPD laid out a plan, and it can work.

Those 179 countries meeting in Cairo in 1994 had it right: Invest in health education and rights, especially for women and girls around the world, and millions can be lifted out of poverty and hunger. Such investments reduce maternal morbidity and mortality, prevent child marriage, end the scourge of unsafe abortion, and ensure greater equality between men and women. All it takes is some political will and a remarkably small amount of support from the U.S. government.

In other words, we can save the world but we’re not.

U.S. support for international family-planning programs began some 50 years ago, with broad bipartisan support. Over time, however, conservatives–including Republicans in Congress–have increasingly sought to limit U.S. funding for such programs, and have successfully added a dizzying array of restrictions on how that funding can be used.

It’s not that people have changed their minds on the subject. Public opinion research has consistently shown tremendous support among Americans for accessible family-planning services, as well as investments globally in women’s health and empowerment–a critical component of U.S. foreign policy. According to American Public Opinion and Global Health (May 2009), 68 percent of Americans support “helping poor countries provide family-planning and reproductive-health services to their citizens.” Some 77 percent support “improving the health of mothers and children in poor countries.” And, according to the Kaiser Family Foundation, 85 percent of Americans think it is important for the U.S. government to “promote the rights of women” in developing countries.

Despite these statistics, conservatives continue to escalate their attacks on not only domestic programs but on international reproductive health. While the U.S. House vote to defund Planned Parenthood received much media attention earlier this year, similar attempts by House Republicans to defund the United Nations Population Fund have gone largely unnoticed. UNFPA works in some 150 countries, supporting programs that help women deliver healthy babies and survive delivery, enable couples to determine the number and spacing of their children, reduce the incidence of HIV/AIDS and other sexually transmitted infections, and end the harmful practice of female genital mutilation.

The conservative excuse for defunding Planned Parenthood has been that part of the organization’s mission is to provide safe abortions (although not with U.S. funds). But UNFPA, even though it doesn’t promote or provide abortions, has still been the subject of a decades-long partisan game of ping-pong. Every Republican president since Ronald Reagan has withheld funding for this important agency, while every Democratic president has restored it. Employing the blatantly false pretext that UNFPA supports China’s one-child policy and condones abortions and sterilizations, conservative politicians try to score points with their constituents, while the neediest women in the world suffer very real and tragic consequences.

Meanwhile, Rep. Chris Smith (R-N.J.) has not yet done what many expect him to do this year, which is to reintroduce the “Global Gag Rule,” which prohibits U.S. funding for family-planning organizations that–with their own funds–lobby on, counsel on or provide abortion services. The rule has also been in place during every Republican administration since 1984 and rescinded by every Democratic one. In many regions of the world, those defunded groups are often the sole providers of basic health care to women, men and youth.

The facts are these:

So let’s meet our global commitments. Call on the U.S. to invest the $3.7 billion needed for maternal, neonatal and reproductive health programs that can end unwanted pregnancy, female genital mutilation, obstetric fistula, maternal mortality and unsafe abortion around the world.

It’s a small price to pay to ensure gender equality, slow population growth and save the planet.

Dr. Suzanne Petroni is an expert in global health, youth development and public policy, with a 25-year career that has spanned the U.S. government, philanthropy and NGO sectors. She is the senior director, Global Health, Youth and Development at ICRW.