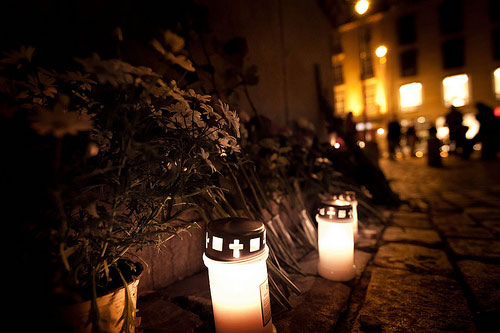 We all know that Norwegian terrorist Anders Behring Breivik, who killed dozens of people in attacks last Friday, was motivated by a toxic mélange of far-right ideology largely revolving around his intense hatred of Islam. The 1,500-page “manifesto” he posted to the Internet–a grab-bag of his own writing and material cut and pasted from assorted right-wing sites–crackles with denunciations of Muslims, Marxists and the assorted other bogeymen that haunt far-right-wing dreams.

But what has yet to be fully appreciated is the degree to which he was also motivated by a deep hatred of women.

I’ve spent much of the past year seeking out and exposing (and often simply mocking) online misogyny for my blog. I find much of it in what some have taken to calling the “manosphere”–a loose collection of interlinked sites devoted to Men’s Rights Activism, pickup artistry and a strange separatist movement of sorts called Men Going Their Own Way (MGTOW). The overwhelming majority of these sites–the most popular of which include The Spearhead, A Voice for Men, In Mala Fide and MGTOWforums.com (to which I won’t be providing direct links, but they’re easy enough to find, if you’re so inclined)–are steeped in misogyny, and in some cases racism. I’ve become very familiar with their standard misogynist “arguments” and rhetorical tropes.

After a blog reader alerted me to the misogyny in Breivik’s manifesto, I read through those sections of the sprawling work that dealt specifically with feminism. I was struck again and again by how utterly familiar it all sounded. Much of it could have been taken word-for-word from the manosphere blogs I read every day. (Not to mention from some of the misogynist trolls who regularly comment on my site.) The ideology is the same, the language is the same, even the specific obsessions are the same–from no-fault divorce to the evils of Sex and the City.

Here’s one typical passage, which appears to have been written by Breivik himself:

It’s the destructive and suicidal Sex and the City lifestyle (modern feminism, sexual revolution) [that] we are taught to revere as the truth. In that setting, men are not men anymore, but metrosexual and emotional beings that are there to serve the purpose as a never-criticizing soul mate to the new age feminist woman goddess.

Breivik goes on to rant about STDs and no-fault divorce, before moving on to another favorite obsession of manosphere misogynists, the supposed sexual “capital” of manipulative women:

Obsessed with the purported danger that Islam will out-breed the West, Breivik offers an assortment of creepy solutions to increase the fertility of Western whites. (It’s not altogether clear to me if these are all his own views, but they certainly are consistent with what he says elsewhere in the manifesto.) After suggesting limiting contraception and banning abortion, Breivik offers this idea:

Discourage women in general to strive for full time careers. This will involve certain sexist and discriminating policies but should increase the fertility rate by up to 0.1-0.2 points.

Women should not be encouraged by society/media to take anything above a bachelor’s degree but should not be prevented from taking a master or PhD. Males on the other hand should obviously continue to be encouraged to take higher education – bachelor, master and PhD. …

Women’s “new role” should be actively illustrated and glorified through series, movies and commercials. …

The end result for implementing the above reforms would be an increase in the fertility rate up from 1.5 to approximately 2.1-2.4 which would be sustainable.

However, this will also involve significant restrictions in women’s rights and media rights.

That last “side effect” does not seem to be much of a problem for Breivik.

One internet prankster conducted a little experiment that proved pretty clearly just how unexceptional this sort of rhetoric is in the manosphere, posting an assortment of misogynist quotes from Breivik’s manifesto (all of them taken originally from the far-right Norwegian blogger who writes under the name Fjordman) to Reddit’s Men’s Rights forum–without identifying them as being from Breivik.

Despite–or perhaps because of–the blatant misogyny, the post initially received numerous up-votes and some positive comments (“Nice post man”) from the regulars. Once it was revealed that the quotes had come from Breivik’s manifesto, the down-votes and critical comments began to stack up.

But Reddit’s Men’s Rights section is actually one of the most moderate and least misogynistic Men’s Rights hangout online. Others in the manosphere have stepped up to defend Breivik’s manifesto (if not his actions) plainly and explicitly, in full knowledge of just whose ideas they are endorsing.

On In Mala Fide, blogger Ferdinand Bardamu praises Breivik’s “lucidity,” and blames his murderous actions on the evils of a too-liberal society:

[A]nother madman with a sensible manifesto. Another completely rational, intelligent man driven to murderous insanity. And once again, society has zero introspection in regards to its profound ability to turn thoughtful men into lunatic butchers. … He is the bastard son of a masochistic, degenerate, rootless world that pisses on its traditions and heritage to elevate perversity, mindless consumerism and ethnic self-hatred to the highest of virtues.

That final reference to “ethnic self-hatred” seems to be Bardamu’s euphemistic way of complaining that not enough white people are white supremacists.

Meanwhile, Chuck of Gucci Little Piggy offers a somewhat more restrained, if ultimately more puzzling, defense of Breivik’s manifesto–or at least that portion of the manifesto that Breivik borrowed from Fjordman.

Chuck endorses Breivik’s (and Fjordman’s) notion that feminism “grease[s]the wheels to allow Islam into his country.” The rest of Chuck’s post elaborates on Breivik’s/Fjordman’s theories, arguing that feminism’s “emasculation of Western men has taken the organic policing mechanism out of the hands of men in society,” and thus rendered Western society helpless before the Islamic cultural invaders.

But the strangest response I’ve seen so far to the massacre in Norway comes from Sofiastry, an anti-feminist blog that seems to be broadly sympathetic to the “alternative” (that is, the “intellectually” racist) right.

I feel that Breivik is being tried for more than his cruelty within the feminist community. The fact that he belongs to the privileged group of the white male makes him hate-worthy along with every other privileged white male who might sympathize with his ideology, even if they don’t happen to be psychotic. Breivik exemplifies White Men, even though Osama Bin Laden to the very same liberal ideologues did not represent Every Muslim.

It’s another symptom of our culture that feels it is OK to hold white men to higher standards of political correctness, self-flagellation and martyrdom whilst simultaneously relentlessly berating and mocking them on a cultural level.

Yep, that’s right. She thinks we hate Breivik … because he’s a white dude.

I can’t speak for every feminist, but for me, it’s more the murdering, the misogyny and the racism. But mostly the murdering.

No, Breivik is not a Men’s Rights Advocate (MRA). No, he didn’t take his marching orders from The Spearhead or In Mala Fide. But he is steeped in the same kind of hatred that is prevalent on those sites, and many of his repugnant beliefs about feminism and women in general are virtually identical to beliefs widespread in the misogynistic manosphere–a fact that a few in the manosphere are already willing to acknowledge, as we saw above.

Excerpted from a post at Shakesville. Read the rest here.

Photo of Oslo vigil for the attack victims from Flickr user nrkbeta under Creative Commons 2.0.

David Futrelle is a freelance writer in Chicago. His work has appeared in publications ranging from Salon.com and the Washington Post to Money magazine. He blogs about misogyny at Manboobz.com.