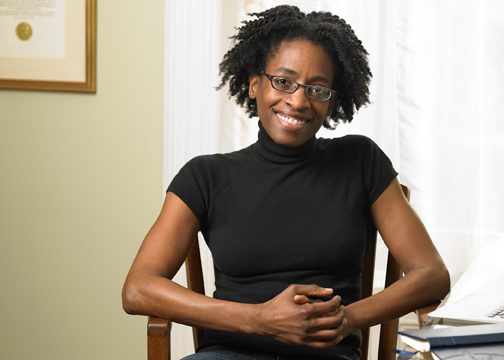 As an emerging young-adult author and activist blogger, I jumped at the opportunity to talk diversity in publishing with Jacqueline Woodson–one of the few queer, Black or feminist writers of bestselling contemporary children’s books.

An author of 30 acclaimed books for young readers, Woodson is a legend in the world of children’s literature. I was eager to hear her views on the industry’s shocking lack of equity (people of color make up less than 5 percent of children’s book authors published in the U.S. annually). I faced years of rejection before publishing an award-winning children’s book, so I wanted to know how Woodson remains so prolific and maintains a positive outlook.

I learned in our conversation, below, that Woodson has no illusions about the challenges of working in an industry where people of color and LGBTQ authors are significantly underrepresented. As technology transforms the world of books, Woodson shares her vision of the future of publishing and the ongoing need to tell stories that affirm the dignity and value of every child.

Thank you so much for taking the time to speak with me. As a child, what books offered you a reflection of yourself, and which ones opened up another world for you?

I feel like I was able to make the journey of finding myself in any book because that was all I had. I would read something like Are You There God? It’s Me, Margaret and [relate because] I was flat-chested like Margaret. And the books that really opened doors for me—one was Stevie by John Steptoe. Just the fact that they talked like I did, they were brown like I was brown.

And Mildred Taylor’s Roll of Thunder, Hear My Cry ’cause my family was from the South. Zeely was one of the first books I read that was by an African American about African American people. Sounder [a story about African American sharecroppers by a white author] to this day still makes me angry. It was supposed to be my people and it wasn’t and I couldn’t tell how it wasn’t. So I felt like, almost kind of like I wasn’t, like something almost was wrong with me. As an adult I realized that no one had a name except the dog. They were poor and sad. They were supposed to be Southerners but they never touched each other, and you know Southerners are always hugging and kissing and saying, “Look how you’ve grown!”

Somewhere around 7th grade I came to If Beale Street Could Talk by James Baldwin. I also remember reading Toni Morrison’s The Bluest Eye when I was a kid.

You have written 30 books about an incredibly wide range of experiences, including foster care, teen pregnancy, witness protection programs, police brutality, incarceration. Your latest book is about drug addiction (Beneath a Meth Moon, An Elegy 2012). I notice that many of your characters move from isolation/alienation to a place of belonging. How do you develop ideas for your books, and is there a particular overarching message you want to send young readers?

It’s interesting that you say they move from isolation to belonging because that’s kind of what I did from my twenties to my thirties. And so I think I’m telling that story again and again in different ways and constantly figuring it out maybe just a little more deeply than the last time. I don’t think I have a message aside from what I believe myself, which is that we all have a right to be here, and trying to show the many ways that people can be here and be whole. Which is what I’m constantly trying to reinforce in myself and my kids and the community. So if someone said, “Why do I write?” I think because this is the power I have, this is what I know how to do in order to feel powerful and to make others feel powerful.

Do you identify as a feminist writer?

The Cooperative Children’s Book Center keeps annual statistics that show that authors of color wrote less than 5 percent of U.S. books published for children in recent years. You are a prolific, award-winning author–but could you name five other black LGBTQ authors of children’s literature?

Um…I couldn’t. I probably could name two, but I don’t know if people are just not out. I think there are people who are still very closeted. You’re dealing with a society that automatically associates pedophilia with anybody who’s interested in children in any way, and a lot of people who still think that queerness is some pathology.

I haven’t come across a lot of young black writers who are new but I feel like, if the book is finished and it’s halfway decent, there’s a home for it. I don’t know if that’s me just being out there and not knowing enough about publishing. I mean, I think of Coe Booth, Brenda Woods, the woman who did Fly Girl [Sherri L. Smith]. You’re one of the new writers coming up: I think you’re one of the people who’s potentially going to change the world of speculative fiction. But I think in terms of publishers trying to figure out where it belongs, that’s kind of a slower movement—especially with the business of books changing so quickly.

Do you feel optimistic about the future of publishing?

I feel optimistic but I think people can’t expect it to be the old way of doing things. I mean, my first book was published in 1989. I think if I was starting to write today, I would be self-publishing.

Photo of Jacqueline Woodson by Marty Umans courtesy of Woodson.

The full interview is available for viewing on Zetta Elliott’s YouTube channel; here is part I:

You can read Jacqueline Woodson’s review of Carolyn Cooke’s Daughters of the Revolution in the Summer issue of Ms., on newsstands now. To have this issue delivered straight to your door, join the Ms.community.

Born in Canada, Zetta Elliott moved to Brooklyn in 1994 to pursue her PhD in American Studies at NYU. Her poetry and essays have been published in several anthologies, and her plays have been staged in New York, Chicago, and Cleveland. Her first picture book, Bird, won the Honor Award in Lee & Low Books’ New Voices Contest; it was named Best of 2008 by Kirkus Reviews, a 2009 ALA Notable Children’s Book, and Bird won the Paterson Prize for Books for Young Readers. Elliott’s first young adult novel, A Wish After Midnight, has been called “gripping,” “a revelation…vivid, violent and impressive history.” Her next novel, Ship of Souls, will be published in January 2012. She is Assistant Professor of Ethnic Studies at Borough of Manhattan Community College and currently lives in Brooklyn.