Balancing the Budget on the Backs of Women - Ms. Magazine
Skip to content 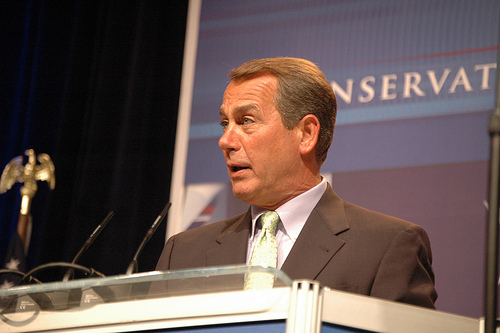 If you think Tea Party misogyny is limited to restricting reproductive choice, think again. The looming possibility of the first-ever U.S. government default—a “crisis” that was deliberately created by the Republicans—has morphed into a bipartisan carte blanche to commit gender violence.

There’s an assault on women built into every one of the debt ceiling “deals” now under discussion. But the one by the Congressional Gang of Sicks is especially draconian. Of five “immediate cuts” proposed, four would directly damage women.

The first, a cap on discretionary federal spending, would cause dozens of federal programs to be scaled back or terminated. Think services as disparate as health and safety inspections, health care assistance and Head Start. This harms women in two ways: We are more likely to rely on the services provided by government programs, and we are more likely to be laid off as the programs are cut.

The second proposal, changing the way Social Security is indexed for inflation, has bipartisan support, which is a shame. By reducing the purchasing power of Social Security checks, the proposal would hit the pocketbooks of older women, who rely more on Social Security than do men because women’s jobs are less likely to carry pension benefits.

A third proposal from the Gang of Six would repeal the “CLASS Act,” a voluntary insurance program established by last year’s health care reform. This will leave countless disabled women unable to pay for home-care services.

The fourth element here is straight out of 1984: “Examine ways to make unemployment insurance more effective.” What this really means is, “Let’s cut unemployment compensation.” Though men are more likely to be unemployed than women, that trend is reversing: Currently, women’s unemployment rates are climbing while men’s are falling.

If these policy changes don’t make you sick, the Gangsters’ proposals for rewriting the tax code will.

In a nod at “sharing the burden,” the plan includes some new tax revenue–in theory a good idea. Raising taxes on those who can afford to pay them is sensible policy. But this proposal would extract $1 trillion more in taxes from ordinary folks who own homes, contribute to charity or receive health insurance through their jobs. Yes, Virginia, this includes millions of women in the middle class and below. Why are we not surprised that there’s no mention whatsoever of increasing taxes on multi-billion dollar corporations (many of whom are taxed at a lower rate than you or I do) or on individuals earning millions of dollars a year?

The Gangsters’ proposal for tax code simplification make the overall U.S. tax system even less progressive, thereby shifting the burden of taxation further onto the shoulders of those who can least afford to pay. Yep, again that would be women, since we still, on average, earn only 76 cents for every dollar earned by men.

Even if you don’t lose your job when federal programs are cut back, or end up worse off when homeowner tax breaks are eliminated, you’d be sure to be hit by proposed changes in benefits programs. In just six months, under the Gang of Six plan, Congressional committees would have to cut $500 billion from health programs serving the poor and retirees, and another $250 billion from such areas as veteran’s services.

One final policy change rubs salt into our economic wounds by calling for curbs on medical malpractice lawsuits. Do you realize that many of the most destructive medical devices and drugs sold in the U.S. target women? Remember fenfluramine/phentermine (aka Fen Phen) and the Dalkon Shield? Under this proposal, damages would be limited to economic losses only.

That’s the nightmarish future we’d face under the Gang of Six plan. But even if it doesn’t pass, the Gangsters can celebrate their total success at convincing nigh on every elected official in DC that the “deficit crisis” is so severe that draconian cuts are necessary. That’s why all the plans now under consideration in Congress—Boehner’s, McConnell’s and Reid’s—propose a trillion or more in spending cuts to some of the government’s most essential services.

Think this recession isn’t bad enough? You ain’t seen nothing yet.

No matter which of these agreements is ultimately accepted, women will feel the pain. With budget cuts of the size currently agreed upon by all the key players, the economic suffering associated with unemployment, homelessness, child hunger, medical deprivation, family food insecurity, poverty and old age is only going to get worse.

Women, in short, are screwed.