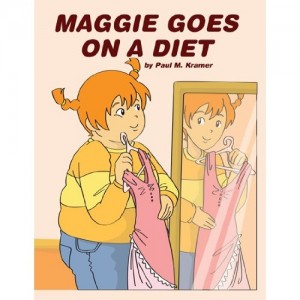 The children’s book Maggie Goes on a Diet hasn’t even been released yet, but it’s already been deemed problematic by many, and rightly so. Even without reading the book, much can be gathered from both the title and the cover, which shows Maggie, the book’s 14-year-old protagonist, holding a dress while looking in the mirror at a slimmer version of herself. The summary reads,

This book is about a 14-year-old girl who goes on a diet and is transformed from being extremely overweight and insecure to a normal-sized girl who becomes the school soccer star. Through time, exercise and hard work, Maggie becomes more and more confident and develops a positive self image.

Despite what author Paul M. Kramer claims, the phrase “goes on a diet” does not evoke the dictionary definition of diet: “food and drink considered in terms of its qualities, composition and its effects on health.” Rather, popular usage of “going on a diet” clearly means something “limiting eating for the purpose of reducing weight.” And that immediately raises red flags. For one thing, 95 percent of people who lose weight on diets gain it back within five years. For another, limiting eating may encourage eating disorders–and do we want to stimulate such disorders in a target audience of 4-to-8-year-olds?

The book also suggests that the reason little girls should want to lose weight is because their peers make fun of them. Not to mention what the implications are of an older (and, let’s be honest, not exactly thin) man dictating what young girls should look like. Because we obviously need more men defining beauty for women, while not having to ascribe to the same beauty standards themselves.

The media has intently covered the backlash against the independently published book, which is due to be released in October. A quick scan of popular headlines for articles about Maggie Goes on a Diet show how critics and parents have been outraged:

The reassuring fact that many of the news stories surrounding the book have been negative does not, however, undo the fact that the book has received far more publicity than it would have otherwise as an independently-released book. And while many (most?) parents seem to see the problem with explaining healthy eating in the context of a “diet,” there are also the few who see the book as positive. Keith Ablow, contributing psychiatrist for (of course) Fox News, says,

I think [Maggie’s] a fabulous role model–far better than the size-20 women who go on talk shows and lie about how happy they are with their bodies.

One of Kramer’s largest oversights was failing to point out that parents should be in charge of what their children eat and how they exercise, and that maybe Maggie doesn’t have a choice about what her parents and school lunches offer her. As someone who tried to go vegetarian at age 16, without support, it is extremely hard to make the change when school doesn’t provide any options and parents don’t know what foods to buy or how to cook them.  Secondly, girls are already versed in the concept of dieting by the time they are 10. According to the Council on Size and Weight Discrimination, “Fifty percent of 9-year-old girls and 80 percent of 10-year-old girls have dieted. … Young girls are more afraid of becoming fat than they are of nuclear war, cancer or losing their parents.” They don’t need an introduction at 4.

However, it’s probably a good sign that those who have pre-ordered the book so far appear to have done so as a joke. On Amazon, customers who bought “Maggie” also bought “Go the F**k to Sleep” by Adam Mansbach.

40 Percent of Single Moms Face Food Insecurity. The Fall of Roe Will Plunge Them Deeper Into Poverty
Her Ex-Husband Is Suing a Clinic Over the Abortion She Had Four Years Ago
Keeping Score: ‘The Dominoes Have Started to Fall, and They Won’t Just Stop at One’