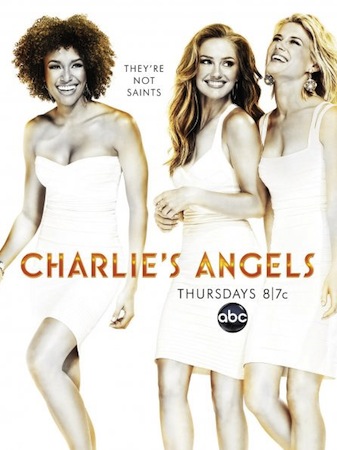 In the original TV version of Charlie’s Angels, the three “Angels” were graduates of the police academy who were working in police jobs that failed to make the most of their superior skills.

When Drew Barrymore revived the concept with a pair of movies, she emphasized the superior skills part, making two of the Angels geniuses and athletes and the other (her own character) a self-made woman with a  bit of a checkered past. In both TV and big-screen versions, Charles Townsend, the wealthy owner of a detective agency, recruited the best of the best to do jobs only they were good enough to do.

The new TV re-do of Charlie’s Angels features three very bad girls. They were all previously criminals, and while their special skills involve hands-on fighting, they rely mainly on shooting their guns with abandon (something Barrymore did not allow in the movies but has curiously capitulated on for the new show; she is an executive producer). They also steal and climb walls. They are not geniuses and they are not exceptional policewomen languishing in unfulfilling posts as meter maids and switchboard operators. And Charlie has not recruited them; he has saved them.

You learn all this in the first 30 seconds of the iconic opening, and for a lover of both the original TV series and the movies, that makes it hard to keep watching. It gets even harder when the angels say things like, “I never thought my heart would hurt this much” and “We’ll find out who did this … if it’s the last thing we do.” It’s hard to imagine TV writing being more soulless than this, and it’s especially painful for a franchise known for irony and whimsy.

I kept watching, but it didn’t get any better. Yes, we finally get our first African American Angel in Kate (Annie Ilonzeh), but both the camera work and the writing make clear that the blonde (Rachael Taylor) is the heart of the show, while Kate is more of a sidekick. Minka Kelly‘s inability to pronounce her final consonants may have served her well as a high school cheerleader in Friday Night Lights, but as Eve she comes across as too young and weak to live up to the Angels of the past.

One of my favorite things about the original (I spent many happy childhood hours pretending to be Cheryl Ladd‘s Kris Munroe) and the movies is the role of disguise as a major Angels crime-solving technique. The new Angels dress up, too, but in the same way that Halloween has become less fun as the standard costumes for women have devolved into endless variations of “slut,” these Angels disguise themselves by showing plenty of leg. Their sexy devil outfits look like they came from a Halloween superstore, not from the creative minds of exceptional detectives. And they do not, as the best Angels’ disguises did, create character. Remember how Cameron Diaz‘s character even made herself look ugly for one of her disguises in the first Angels movie? Don’t expect to see anything that ironic on this show.

Other disappointing changes include making Bosley (their intermediary with Charlie) a young hunk with super fighting skills. The best Bosleys have highlighted the women’s superior talents through their own physical ineptitude. This one (Ramon Rodriguez), like the new Charlie, must save the Angels when their own skills are not enough.

From a feminist perspective that’s the biggest problem. Recruiting exceptional women who have not yet found fulfilling work is very different from saving bad girls from themselves. Other than the opportunity to make double money by airing as many Cover Girl commercials during the show as possible, I can’t imagine why Barrymore would want her name attached to this regressive, reductive rendition of a TV classic. She of all people should know: Being bad doesn’t necessarily make you badass.