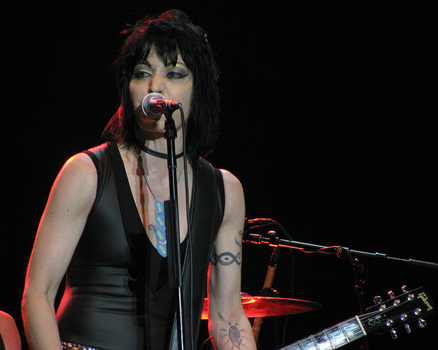 When the sister-led rock band Heart emerged in the early 1970s, lead singer Ann Wilson says, she and guitarist-sister Nancy were pretty much sui generis:

When I first started my career, the words ‘women who rock’ were nonexistent. …There were ‘singer/songwriters’… but there was no ‘women who rock’ category. It was entirely a boy’s club then. …Women had yet to seize part of it for themselves by redefining Rock in their own image.

OK, so she was leaving out Janis Joplin and Grace Slick, plus all the rocking women of color of that era and previously, like Big Mama Thornton and Rosetta Tharpe, but still she was right: Women were second-class citizens in the rock world.

And although things have gotten much better, gender-wise, over subsequent decades, the Rock and Roll Hall of Fame–which has excluded women from their annual inductee list four times–has always lagged behind. But this year, a respectable one-third of the list of nominees for the Hall are rockin’ women–including Heart. Maybe the Hall would be embarrassed to have it otherwise, especially as it’s currently showing a Women Who Rock exhibit (through next February 26), on which the Ms. Blog has previously commented.

Also nominated is one of the most badass women rockers of all time, Joan Jett, along with the band Rufus featuring Chaka Khan (and come on, can you name anyone else in Rufus besides the great Khan?), disco-era star Donna Summer and influential singer-songwriter Laura Nyro.

We heart Heart–which, to our delight, sent cease and desist letters to the McCain/Palin campaign for their bastardization of their song “Barracuda”–and all the other women nominees. (Ms. senior editor Michele Kort especially loves the legendary Nyro, whose biography she wrote.) Last year, the only women let into the mostly male bastion was the great Darlene Love, and the year before just the two women singers in Abba. Come on, Rock Hall, up those female numbers this time!

The criteria for admission is supposed to be an artist’s musical influence on other artists, length and depth of career and body of work, innovation and superiority in style and technique, and above all, musical excellence. We’d say these nominees are more than qualified! The induction ceremony will take place next April in Cleveland.