Where Are All the Sitcom Lesbians? - Ms. Magazine
Skip to content 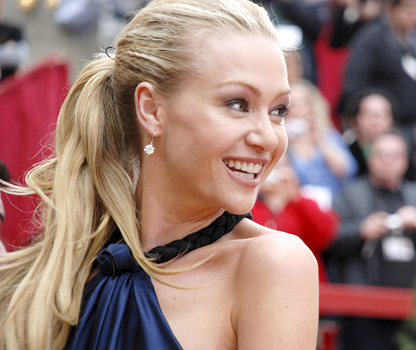 News broke last week that Portia de Rossi will star in a sitcom produced by her wife, Ellen DeGeneres. NBC has signed on for a “put pilot”, which means they’ve committed to screening the first episode (and thus, hopefully the whole first season).

So far, all we know is that the show is about two sisters with a difficult relationship, and Portia will play one of them. Speculation has begun about who else might be cast, but for me the big question is: Will Portia be allowed to be out?

TV today has an overall dearth of gay characters, as we learned today from the latest GLAAD “Where We Are on TV” survey. The 2011-12 season offers only 19 gay characters out of nearly 650 roles, down a percentage point from the year before.

But gay leads are an especially rare breed. There’s only ever been one lesbian lead character on a sitcom, Ellen herself, and her eponymous show was canceled shortly after she came out on air. Gay men aren’t often sitcom leads, and their characters can be problematically stereotypical, but since Will & Grace premiered in 1998, they have become increasingly mainstream. Two of this season’s returning comedies, Modern Family and Happy Endings, give gay male characters prominent screen time. Lesbians should be so lucky.

Not that we haven’t seen gay women on TV, most memorably in The L Word, which prior to becoming a melodramatic (and perennially unsolved) murder mystery in its fifth season, was actually a groundbreaking show about a group of lesbian friends. Currently, teen thriller Pretty Little Liars portrays gay teenager Emily without, thankfully, recourse to lesbian clichés or storylines that revolve around her sexuality. Meanwhile, The Good Wife features a bisexual woman, although she’s hardly a role model. And, paean to a more retrograde era though it may be, at least The Playboy Club has a lesbian “bunny”.

But when it comes to sitcoms, women who love women are sidelined, if they’re shown at all. Sure, Rosie O’Donnell made brief appearances on Will & Grace and Friends had Carol and Susan, but those characters were peripheral and their portrayal stereotypical. In ‘90s episodes of shows like The Golden Girls and Designing Women, lesbian characters had one-episode arcs intended to teach the main, straight characters (and the audience) about tolerance. No one seemed to realize that what might really promote tolerance was to have an existing character come out and for it to be no big deal.

Since sitcoms aim to reflect reality, the omission of a group which is already marginalized reflects badly on both television and society. There are some signs of hope, however. While Carol Leifer’s 2009 script about a pregnant lesbian didn’t pan out and, earlier this year, I Hate That I Love You, a pilot about a lesbian couple, wasn’t picked up as a series, there is one sitcom in the works that clearly has a gay female lead: My Best Friend is a Lesbo. Let’s just hope it changes the title and reins in the othering.

In 2009, Liz Feldman, who won four Emmys while writing for Ellen’s talk show, spoke about her long struggle to get a Sapphic sitcom on the air. But she remained hopeful, saying: “It might take a really long time but I promise you that there will be a sitcom or a half-hour single-camera with a lesbian lead character.”

Portia, we’re looking at you.