Pawns of War and Peace: What Does the Future Hold for Afghan Women? - Ms. Magazine
Skip to content 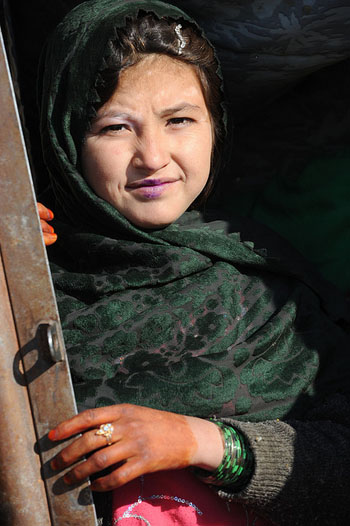 On November 18, 2001, in a radio address to the nation, then-First Lady Barbara Bush condemned the degrading treatment imposed on Afghan women by the Taliban regime. Thus the story of the U.S invasion of Afghanistan began with women: the promises of liberating them, the efforts to gain their trust and to feed their malnourished babies and bring security to their war-ravaged country. In the words of Asila Wardek, director of human rights at the Afghan Ministry of Foreign Affairs, “the international community used women’s rights [PDF] as an entry point into the country–they said they were here to protect women’s rights.”

It is this complex tragedy of trust, betrayal and the exploitation of Afghan women that is the subject of ActionAid’s latest report A Just Peace: The Legacy of War for the Women of Afghanistan [PDF]. Compiled from interviews with more than 1,000 Afghan women, including 497 from far-flung rural areas, the comprehensive document illustrates the precarious position of Afghan women, caught between the gains made in the past decade and the possibility that a hurriedly brokered peace may snatch them away.

As the quantitative findings of the report illustrate, there has been progress on women’s rights in Afghanistan. Sixty–six percent of women surveyed by ActionAid said that they feel safer now than they did ten years ago, and 72 percent believe that their lives are better than they were a decade ago. Several women activists said they believe deeply entrenched patriarchal attitudes have slowly been shifting as women have emerged again into the public sphere. Thirty-nine percent of schoolchildren are now girls, 27 percent Parliament members are women (higher than the world average) and 25 percent of government employees are female.

The numbers show both an ideological and sociocultural transition. The security provided to women, and the incentives created to give them room in the public sphere, have been eagerly availed by women committed to helping rebuild their country. As a practical matter, in a country where the male population has been severely decimated by three decades of war, these opportunities have empowered women to help support their households. By doing so, women have further chipped away at existing norms, which have long held that a male guardian must be found to enable survival after women are widowed or orphaned.

The advances are fragile, both in actual terms and in the position that Afghan women find themselves in–putting faith in the international community that may turn its back on them. As the report documents in detail, the changes made in the past decade have already begun to be rolled back by those who see the departure of U.S and NATO troops as a call to return to the ways of old. The 10-year plan that was passed by the Afghan Parliament in 2008, which provided detailed guidelines for empowering women and continuing their advance, has all but been abandoned. Efforts to pass laws to criminalize domestic violence, which affects more than 87 percent of Afghan women, have failed  in recent months to garner parliamentary support. The writing is on the wall that women’s particular concerns will not be addressed in the peace process being developed for a withdrawal from Afghanistan, so it’s not surprising that more than 90 percent of Afghan women fear a return to a Taliban-style government (see Action Aid report) and yet another dark era in which they will be eradicated from the public sphere.

The ominous sidelining of Afghan women from the peace process suggests that women are no longer a cause that fits the strategic aims of leaving Afghanistan. This turning away by a world benumbed by its own economic crises is a moral catastrophe of international proportions. Its victims will be Afghan women who dared to put their faith in the constancy of the attentions of the international community and its ability to follow through on its promises of liberation and sisterhood.

When they first gained power, the Taliban instantly and forcibly banished women into the private sphere, casting a visible pall of fear over a country suddenly reduced by half. Unless the international community recognizes its responsibility to fulfill its commitments to Afghan women, who so bravely placed their trust in the empathy of the world, this recipe of marginalization and banishment will again be used by those who see women as pawns in their political game.