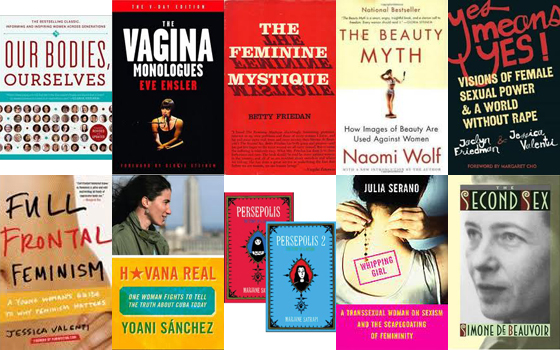 Now is the time to submit your guesses in the comments for the top 10! We’ll be releasing those, in a cosmic coincidence, on Monday, 10/10. Clearly the stars as well as the Ms. readers had a hand in this list.

20. The Feminine Mystique
by Betty Friedan
W.W. Norton & Co., 1963
The landmark second-wave book that identified “the problem that has no name” and debunked the myth of the “happy housewife” has been called groundbreaking, earthshaking, consciousness-awakening and revolution-making. Find it here.

19. The Beauty Myth: How Images of Beauty Are Used Against Women
by Naomi Wolf
Chato & Windus, 1990
In her bestselling classic, social critic Naomi Wolf keenly dissects the cultural obsession with physical perfection that controls women and drives them to self-hatred. Find it here.

18. Persepolis 1 & 2 — The Complete Persepolis
by Marjane Satrapi
Pantheon, 2003 and 2004
In this bestselling memoir-in-comics, Iranian graphic artist Satrapi relates her early years in a large family shattered by the Iranian Revolution and her adolescence in Vienna, followed by a homecoming and a self-imposed exile. Find it here and here.

17. The Vagina Monologues
by Eve Ensler
Virago Press, 1998
Like Ensler’s I Am an Emotional Creature, these monologues-drawn-from-interviews blur the borderline between fact and fiction. Ensler dramatic celebration of female sexuality has inspired laughter, tears and a whole rethinking of the way we talk about vaginas–starting with calling them by name. It has also inspired a global grassroots movement: V-Day. Find it here.

16. Whipping Girl: A Transsexual Woman on Sexism and the Scapegoating of Femininity
by Julia Serano
Seal Press, 2007
The author uses her background as lesbian transgender activist and professional biologist to start a much-needed conversation about the sometimes-uneasy relationship between feminism and trans activism. Serano unmasks cultural beliefs about femininity and debunks misconceptions about transsexuality. Find it here.

15. Havana Real
by Yoani Sánchez
Melville House, 2011
This collection of writings from Sánchez‘s blog, Generation Y, tells everyday stories of living, eating (or more often, not eating) and suffering in Castro’s Cuba. For her efforts, she’s been kidnapped, beaten and called “a spy in the pay of capitalism.” Find it here.

14. Our Bodies, Ourselves
by the Boston Women’s Health Collective
1970
For 40 years, this indispensable tome has made women their own health experts. The newest 2011 edition adds up-to-date information on how health-care reform affects women, how to minimize exposure to pollutants that endanger reproductive health, and more. Find it here.

13. Full Frontal Feminism: A Young Woman’s Guide to Why Feminism Matters
by Jessica Valenti
Seal Press, 2007
Valenti, founder of Feministing, appeals to young feminists with a sassy and shrewd look at pop culture, health, reproductive rights, violence, education and relationships. Feminism, she dares to assert, can even be cool. Find it here.

12. The Second Sex
by Simone de Beauvoir
1949 (French); 1953 (English translation by H.M. Parshley); Knopf, 2010 (new English translation by Constance Borde and Sheila Malovany-Chevalier)
This revolutionary book draws on interviews with women from all walks of life, research about women’s bodies and minds, history, and economics to document inequality, explore otherness, and analyze the whole Western idea of “woman.” Find it here.

11. Yes Means Yes: Visions of Female Sexual Power and a World Without Rape
by Jaclyn Friedman and Jessica Valenti
Seal Press, 2008
Valenti teams up with anti-violence activist Friedman to curate this daring essay collection, which calls for us to end rape altogether by going beyond a culture of “no means no” to one of “enthusiastic consent.” Find it here.