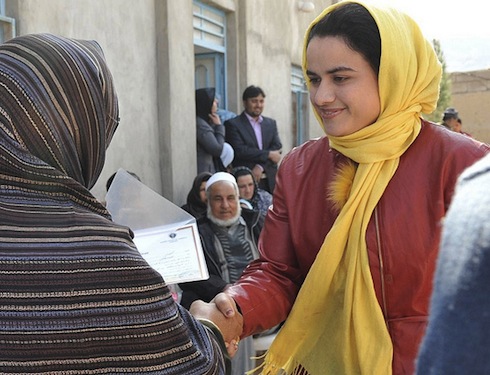 The next installment of the groundbreaking five-part PBS series Women, War & Peace, airing October 25, takes us to Afghanistan, where women continue their fight to carve out a role for themselves in the country’s future. Peace Unveiled follows the lives of three different Afghan women as they share their hopes, fears and struggles. The Ms. Blog spoke with one of them, women’s rights activist Hasina Safi, about what the U.S. troop withdrawal means for women’s rights, how the country is tackling maternal mortality, and what she envisions for her country and its women.

Ms. Blog: What is the current status of women in Afghanistan? Has it improved or worsened since the U.S. invasion?

Hasina Safi: To be very practical, strategy-wise for the last ten years, based on the quota system that we have in the Constitution, there have been many improvements. You can see women in the Parliament, along with active women ministers, directors in government organizations and women in the civil society. Afghanistan has ratified CEDAW. But to be very honest, we have not been up to the expectations we had. There are strong policies and strategies but they remain on the shelf. They are not being implemented up to the expectations of women.

What to you think about the U.S. troop withdrawal?

It is very easy to say withdrawal, but as an Afghan woman it brings a lot of worries. Of course there is a lot of work the U.S. must do before they can just get up and go.

You have worked very hard to ensure Afghan women are represented in the government, even working with the U.S. on the issue. Do you think change for women in Afghanistan will come at a political level first or a cultural one?

It has already entered the political level. We have always been supported by Melanne Verveer and Hillary Clinton; whenever they had the opportunity they met with us, they listened to our recommendations and they tried to facilitate meetings for us in order to make our voice heard by the policymakers in the United States. So at the political level there have been some improvements, but I think we really need to work on the cultural level more. The cultural level is much harder to achieve success at. One of my key recommendations would be to build a strong base of education, employment and health care in Afghanistan, which will take us toward stability as a nation.

Afghanistan has one of the highest maternal mortality rates in the world. What would you say is the most important intervention to reduce the number of women dying in Afghanistan?

There have been many interventions in regards to maternal mortality, such as the midwifery program, mobile clinics, etc. However, it is not enough to help a number of women, especially in the remote areas of the country. These women need access to qualified professionals who will make them aware of birth spacing, and how to take good care of children in order to bring forth a health society.

Tell us about Peace Unveiled, which you are featured in–what does it show the U.S. about Afghan women?

There are several characters in the documentary who represent women at different levels and stages. My character is a professional woman who struggles to prove that a woman can balance her work and life. It shows that Afghan woman have our problems within our families, communities and society, but we always move forward and are ready to face challenges in order to be more strategic for our daughters and coming generations.

Is there anything else you want to tell Ms. Blog readers about your country and the women there?

Whatever has happened in the last ten years, I am still positive–because if you think positive, you see positive. I urge the world: Please think about Afghanistan as a part of the world. There have been positive changes, and even with so much interference of the vast community we have managed to give ourselves an identity as Afghans. We have to be proud of that. By being proud of that I mean we want to be a part of the beautiful and developed world. We want our children to be doctors, scientists and pilots, as are other people around the world. And we are ready to take the responsibility for our own future.

Photo of Afghan woman in Farah City receiving a graduate certificate for completing a computer course by flickr user isafmedia under Creative Commons 2.0