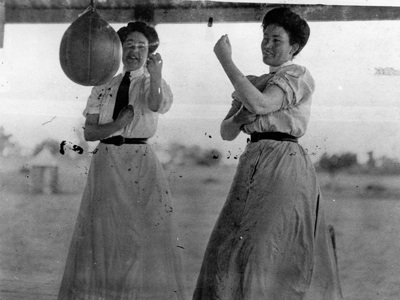 According to the BBC, the Amateur International Boxing Association is advising women boxers to wear skirts. The President of the Association, Dr. Ching-Kuo Wu, argues that it allows viewers to tell the difference between the men and the women:

I have heard many times, people say, ‘We can’t tell the difference between the men and the women,’ especially on TV, since they’re in the same uniforms and are wearing headgear.

At the European Championships in Rotterdam last week, women boxers from Poland and Romania adopted the new uniform (see photos here). A coach of the Poland team said: “By wearing skirts, in my opinion, it gives a good impression, a womanly impression.”

This might be an example of officials assuming that (1) men are the main audience for boxing and that (2) men will watch women’s boxing more if they differentiate/sexualize women.

In any case, it’s probably a combination of both.

Earlier this year they tried this with badminton, but it didn’t take.

The idea that women athletes aren’t sufficiently feminine has been around as long as sports have been around. Today, the feminizing of athletes is ubiquitous.  See our posts on Serena Williams’ ESPN cover, Candace Parker “is pretty, which helps,” press photos of women athletes in dresses, groundbreaking woman sailor is also pretty, sexualizing Olympic women athletes, diets of champions, media portrayals of woman atheletes, and valuing dads in the WNBA.

In a fashion article in the next issue of Ms.–yes, you read that right, we’re taking on fashion!–Minh-Ha T. Pham delves into the pressures on women in non-traditional careers to dress “feminine,” among other feminist clothing issues. Join Ms. now to get the next issue delivered to your door.

Photo of women boxers in 1916 from Wikimedia Commons.

We Heart: Serena Williams, “The One to Beat”