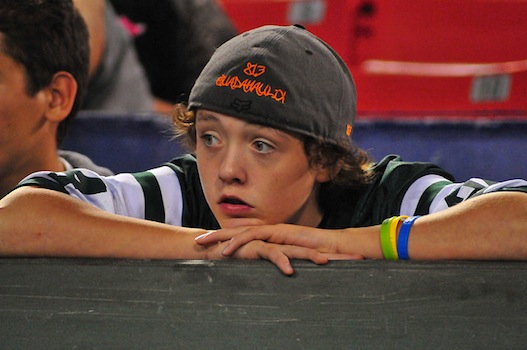 A man sexually assaults children. Witnesses are appalled. But no one tells anyone outside their tight circle. The assailant is eventually accused of attacking eight boys. Yet members of the community rally around the perpetrator and those who protected him.

Shockingly, it’s not especially unusual for communities to rally around perpetrators over victims.

At least when the perps are powerful.

And that all reflects what’s typical of rape culture.

In 2008 a 16-year-old high school cheerleader in a small Texas town said she was raped at a post-game party by Rakheem Bolton, a member of the basketball team. He and two friends forced her into a room to commit the assault. When others tried to get into the room the men fled. Bolton left clothing behind and threatened the homeowner when he refused to return them. Bolton eventually pled guilty to a lesser charge.

School officials responded by asking the cheerleader to avoid the school cafeteria and homecoming activities. And then they kicked her off the cheerleading squad for refusing to root for her rapist. She sued the district attorney, the school district and the principal, but an appeals court ruled against her.

In the summer of 2004 three varsity members of the Mepham High School football team were sexually abused at training camp. The young men were sodomized with pine cones, broom handles and golf balls which had all been coated with a mineral ice that causes severe pain.

Many of the witnesses felt terrible about what had happened. Yet they kept silent.

When the national press broke the story, the community defended the players and coaches. Parents of the abused boys were threatened with death if they pressed charges. Campus rallies were held for the team. When the school administration cancelled football season, Mepham students felt that they had been victimized.

And now, an assistant coach for the Syracuse University basketball team, Bernie Fine, has been accused of molesting two ball boys, Bobby Davis and his step brother Mike Lang. Davis alleges that head coach Jim Boeheim saw Fine molesting him in a hotel room and did nothing. In response, Boeheim has called the two victims–now grown men–money-grubbing liars.

A culture of entitlement, silence and protection lies behind all of the above, says Michael Kimmel, one of the nation’s leading researchers and writers on men and masculinity.

Sports stars are prone to feeling entitled, with schools, coaches, professors and even the police covering for their mishaps and crimes. After all, if the team is damaged, so is the school. And people’s identities are closely tied to their teams.

And so when the Penn State Board of Trustees announced Coach Paterno’s firing, fans became incensed:

Allen Barra over at Salon has an answer:

The football program? The football program?? Are you serious? A former assistant coach was just indicted for over 40 counts related to sexual assault on a child… crimes against humanity — against children — took place in the university’s athletic facilities…

So don’t worry about the football team. Worry about the fact that from now on, whenever the name of Penn State is mentioned, people all over the country — make that all over the world — will be sneering, snickering or spitting. Worry that a long period of penance and healing must begin, and that your actions are delaying this process.

Here we have selfish and shortsighted people who can only think about themselves, and not the pain of others, but who actually work against their own interests in the process—both in terms of how they look and the state of their souls.

So long as we continue cultures of entitlement, silence and protection, we continue our culture of rape.

Originally posted at Broad Blogs and cross-posted at Daily Kos.

Photo of a boy watching a football game by flickr user Ed Yourdon under Creative Commons 2.0