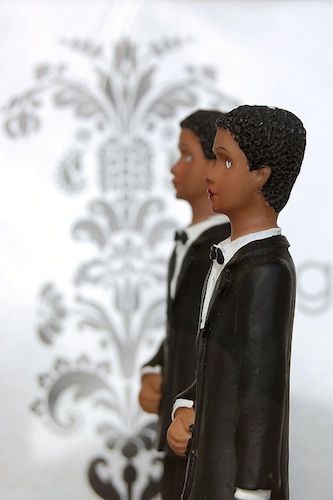 I felt as giddy as a bridesmaid to learn that Standing on Ceremony: The Gay Marriage Plays was settling in for a cozy run at the Minetta Lane Theatre in New York City. As a proponent of same-sex marriage who has written on this complex topic, I was eager to see what other theater artists might have to say about one of the crucial civil rights issues of our time.

Conceived by Brian Schnipper in Los Angeles shortly after Prop 8 was passed in California in 2008, Standing on Ceremony was initially developed as a series of staged readings with celebrities to benefit marriage equality organizations. A few more incarnations, including one at New York Theatre Workshop in 2010, tested the waters for a longer run. The current production, comprised of nine short plays, opened November 13. A portion of the ticket sales will benefit the work of Freedom to Marry.

The time is absolutely right for such a production, and anchoring it in Manhattan has already helped shine more light on the issues because of the many significant media sources based there. So my hat—as well as my garter—were off to Schnipper, director Stuart Ross and lead producers Joan Stein and Richard Frankel.

But as I scanned the names of the playwrights on the program, I had a familiar sinking feeling. Jordan Harrison, Paul Rudnick, Doug Wright, Neil LaBute, Moisés Kaufman, José Rivera … and Wendy MacLeod and Mo Gaffney. Two plays by women out of nine. Rudnick had two. Ok, he’s pretty damn brilliant and I would like him to be my new best friend, but seriously, only two plays by women for this flagship production?

Why does this continue to happen? The production team is doing so much right. They even spearheaded free performances of the script at more than 40 theaters across the country a few weeks ago. With so much thoughtfulness and good will, how did gender parity get overlooked? What was the submission and curatorial process? What happened to the plays by women from the earlier versions in Los Angeles and at New York Theatre Workshop, which included well-known theater artists such as Susan Miller, Constance Congdon, Kira Obolensky, Kathy Najimy and Holly Hughes? I would love to have watched the plays that they wrote.

Heck, I wish they had asked me. I have a full-length play called The State of Marriage about people crossing state lines to get married that I would have been happy to adapt and shorten. Or, I could have written something new, like Neil LaBute was asked to do.

But they don’t know me. And maybe they don’t know a lot of women writers—although we are out here, all across the country, being produced in regional theaters and small alternative spaces. We even have an international cyber community called the International Centre for Women Playwrights, and you should check out the lively discussions on that listserve.

I found myself shifting further in my seat when the cast filed onstage. Craig Bierko, Mark Consuelos, Polly Draper, Harriet Sansom Harris, Beth Leavel and Richard Thomas, all notables from the world of theater or television. Harris (Thoroughly Modern Millie) has chops to rival comedy icon Carol Burnett, and Richard Thomas is an outstanding dramatic actor who has long since eclipsed his status as John-Boy of “The Waltons“. An excellent ensemble, really.

But with the exception of Mark Consuelos, not another person of color in the group. And again, I say, how does this happen? Am I the only person who is noticing this? It kind of feels that way because when the reviews came out in New York, and there are many of them, and mostly and deservedly positive, there is no mention of gender inequity or racial bias.

As much as I hate to raise these issues, to criticize when I would so prefer to cheer, I feel compelled. Racial awareness and gender parity are not just symbolic. When you limit participation by people of color or women, you lose a whole range of perspectives that they bring to the table. We all lose.

There is much good being done here. Straight men freely playing gay couples on stage, lesbian relationships being explored. Things you just don’t see in the theater often enough. And the short play format is perfect for a project of this kind–ideal for our attention-deficit times and a way to showcase many perspectives that then speak cumulatively in relation to each other.

I congratulate Standing on Ceremony on its engagement and wish it a long and happy life. Tickets are on sale through February 26. In the program, the producers noted that future performances will include work by Jenny Lynn Bader, Karen Hartman, Tanya Saracho and Regina Taylor. This is good news, indeed. But why wait to rotate in more work of women at some future point? Why does gender equity continue to be an afterthought? I have high hopes that the fine team behind this groundbreaking production will recognize the relationship between LGBT rights and artistic opportunities for women and people of color. I will be the first to buy another ticket to see a bill with more women writers, and this time maybe I’ll even bring rice.

Joan Lipkin is the Producing Artistic Director of That Uppity Theatre Company in St. Louis, Missouri where she founded the nationally acclaimed Alternate Currents/Direct Currents Series, The DisAbility Project, the Louies and Apple Pie. A strong proponent of collaboration, she also co-founded Women CenterStage! with the Center of Creative Arts, the Nadadada Festival at The Contemporary Art Museum St. Louis, Democracy on Stage with the American Civil Liberties Union, and the Mid-Sized Arts Cooperative.