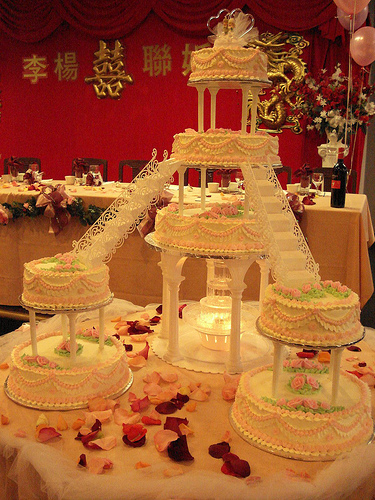 Last week, 26-year-old newlywed college graduate Li Fang (a pseudonym) explained to me over dinner why she had been in such a rush to marry:

If I hadn’t gotten married now, I would still have to date for at least one or two years. Then I would already have passed the best child-bearing age and I would be a leftover woman.

In China, the sexist term “leftover woman,” sheng nu, is widely used to describe an urban, professional female over the age of 27 who is still single. This derogatory term has been aggressively disseminated by the Chinese government, warning women that they will become spinsters if they do not marry by the time they turn 30. The irony of the media campaign is that China’s sex-ratio imbalance has resulted in a surplus of tens of millions of men who will not be able to find a bride.

In 2007, China’s Ministry of Education added the term “leftover woman” to its official lexicon, according to state media reports. In 2010, the All-China Women’s Federation and other government groups carried out a nationwide survey of more than 30,000 people in 31 provinces. Their findings on “leftover women” have been publicized repeatedly by China’s official media.

I have roughly translated some excerpts from the official write-up of the survey (unfortunately leaving out the rich resonance of the Chinese puns.)

The article uses the heading “See What Category of ‘Leftover’ You Belong to.” The first category is leftover women aged 25 to 27 years, who are called “leftover fighters,” sheng dou shi, a play on the title of a popular martial arts film. It says these women “still have the courage to fight for a partner.”

The next category is 28- to 30-year-old women, or “the ones who must triumph,” bi sheng ke, a play on the Chinese name for Pizza Hut. It says these women have limited opportunities for romance because their careers leave them “no time for the hunt.”

The final category, 35 and older, is called the “master class of leftover women.” The term qi tian da sheng plays on the name of an ancient Chinese legend, the Monkey King. It says this category of woman “has a luxury apartment, private car and a company, so why did she become a leftover woman?”

Results from the survey continue to be recycled frequently in the Chinese media, including this report on the official Xinhua News website, November 11: “China’s Leftover Women Unite This Singles Day.” The article says, “More than 90 percent of men surveyed said women should marry before 27 to avoid becoming unwanted.” The message to women: If you want to stand a snowball’s chance in hell of ever getting married in this country, don’t demand too much from your man.

What I find uniquely disturbing is that a respected American newspaper has regurgitated the results of the “leftover women” survey without questioning the sexist nature of the term, the origins of the study or the motivations of the government in disseminating it. The New York Times published an article in April based on the results of the Chinese survey, describing China’s real-estate boom and the pressure on men in China to buy a home in order to find a bride. It says “more than 70 percent of single women in a recent survey said they would tie the knot only with a prospective husband who owned a home” and provides a helpful link to the Chinese survey, but makes no mention about the survey’s extensive descriptions of “leftover women.” Rather, the Times details how Chinese women will stop at nothing to coerce a man to give her a home before she agrees to marry:

With such women on the prowl, even men who do have their own homes have come up with techniques to weed out the covetous and the inordinately materialistic.

It adds that because of China’s sex-ratio imbalance, as many as 24 million men could be perpetual bachelors by 2020: “The marriage competition is fierce and statistically, women hold the cards.”

China’s preference for boys, combined with its one-child policy, has resulted in the abortion of tens of millions of female fetuses. But does the resulting sex-ratio imbalance mean that women really have the upper hand in the marriage market? Although some women no doubt have married for money, I have so far found very little evidence that women overall have turned their scarcity into economic gain. On the contrary, my research suggests that Chinese women have largely missed out on what is arguably the biggest accumulation of real estate wealth in history, valued at more than $17 trillion in 2010, according to HSBC Bank. Many women have been shut out of the explosion of housing wealth because homes appreciating exponentially in value tend to be registered solely in the man’s name. Chinese parents tend to buy homes for sons but not daughters. And women often transfer all of their financial assets to their husband or boyfriend to finance the purchase of a home registered in the man’s name alone.

I believe that a key reason why so many educated women in their mid-20s act against their own economic interests when they marry is that they genuinely believe the government-propagated myth about “leftover women.” These women make excessive personal and financial compromises out of fear that they will never find a husband otherwise.

Why would the government do this? Maybe because China’s leaders are worried about the potential threat to social stability from tens of millions of unmarried men with nowhere to vent their frustration, so they want to marry off as many “leftover men,” sheng nan, as they possibly can. Eugenics may play a role too. The very people the government would like to see having babies are highly educated, urban women, who are increasingly rejecting marriage in neighboring Japan, Taiwan, Singapore, South Korea and Hong Kong.

The Chinese government’s effort to promote marriage has so far been remarkably successful. Li Fang counts herself lucky because she did not become a “leftover woman.” But she has no legal claim to the home she shares with her new husband; the home is registered in his name alone. Because of a recent change to China’s Marriage Law, marital property now belongs solely to the official buyer whose name is on the deed. She does not share a bank account with her husband and does not know how much money is in her husband’s account. She just lost her job as a human resources manager because the company did not want her to take two weeks off for her honeymoon. Rather than ask her husband for more money now that she is unemployed, she says she will continue to draw down her own savings to pay for groceries, clothing and transportation. Does this sound like a “woman on the prowl”?

It’s only a matter of time before Chinese women like her wise up and recognize the “leftover woman” moniker for what it really is: a sexist media campaign by a government facing a severe demographic crisis.