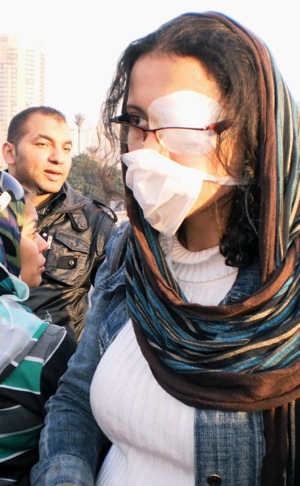 After hours of #FreeMona trending on Twitter, Eltahawy emerged from Egyptian state custody with the defiant tweet: “I AM FREE.”

Via tweets, Eltahawy began describing in chilling detail her horrific ordeal with the Egyptian riot police:

5 or 6 surrounded me, groped and prodded my breasts, grabbed my genital area and I lost count of how many hands tried to get into my trousers

My left arm and right hand are broken acc to xrays

As the official account solidified in the media, a second story came to light: Another woman journalist, Caroline Sinz of the public television station France 3, had also been sexually assaulted in Tahrir Square by a mob of Egyptian protesters. Footage of the attack was captured on Arabic-language television.

“I was beaten by a group of youngsters and adults who tore my clothes… Some people tried to help me but failed. I was lynched,” Sinz told AFP. “It lasted three quarters of an hour before I was taken out. I thought I was going to die.” What happened to her, she says, “would be considered rape.”

Violent clashes between Egyptian security forces and protesters erupted this past week, stemming from growing dissatisfaction with perceived corruption and abuse of the Supreme Council of Armed Forces (SCAF), Egypt’s transitional military authority.

“SCAF is a continuation of Mubarak. When we got rid of Mubarak, we just chopped the head off the weed, but the regime lives on,” explains Amina, an 24-year-old Egyptian activist (name changed at her request). “We did not fight and die in our Revolution for another military regime, and that’s why we are back in Tahrir.”

Many Egyptian activists endorsed the new uprising, embracing it as the second step in the continuing Egyptian Revolution. However, the sexual assault of Sinz by protesters, not police, mars the righteous image of the revived movement. With the first round of parliamentary elections scheduled for Monday, these attacks heighten the tangible apprehension regarding the outcome of the elections and its effect on the status of women in Egypt.

Women’s rights are undeniably a major challenge facing Egypt today. In 2002, the UNDP and Arab civil society leaders released The Arab Human Development Report, which identified the lack of women’s rights as one of the top three barriers to development in the region. Egyptian women’s literacy rate is under 60 percent, and they make up only 23 percent of the workforce. According to The Egyptian Center for Women’s Rights, nearly half of Egypt’s women suffer sexual harassment on a daily basis, and all are subject to discriminationatory “personal status” laws dictating the terms of marriage, divorce, child custody and inheritance. Furthermore, judicial leniency toward domestic violence offenders leaves women vulnerable: An estimated 35 percent of married women experience violence from their partners, and honor killings persist.

With support from Suzanne Mubarak, the wife of ousted President Hosni Mubarak, women’s rights groups achieved a limited amount of legal gains before Mubarak’s ousting. Female genital cutting, once undergone by over 95 percent of women and girls–one of the highest rates in Africa–was outlawed in 2008, and a 12.4 percent quota of women in Parliament was adopted in 2009. During the post-revolutionary backlash against all-things-Mubarak, however, the gender quota was replaced with the weaker requirement of one woman candidate per party in each district, and long-time women’s rights activists fear that their hard-fought progress will be tainted by its association with the former regime.

Egypt is one of only five Muslim countries in which a majority of citizens support using Sharia law as the sole source of legislation. That opinion is shared by 60 percent of Egyptian women. With such popular support, some secular women’s rights activists fear the democratic victory of Islamic parties who would then impose “separate but equal” laws, in which men and women would be segregated in public spaces. However, such policies may prove extremely unpopular in a country where 88 percent of women believe that they should be allowed to work in any job for which they are qualified. Furthermore, when the Muslim Brotherhood created an official political party in June, 1 in 9 founding members were women, although critics note that the party’s official policy is to entirely exclude women from senior government positions.

On International Women’s Day, when Egyptian women assembled in Tahrir Square to express their desire for equal rights in “The New Egypt,” they were met with fierce sexual harassment and assault. Most Egyptians condemned the violence, but many political parties encouraged participants to eschew a focus on women’s rights in favor of broader human rights in order to prevent further fragmentation in Egyptian society. This notion was vehemently rejected by several women’s rights groups who continue to mobilize, some lobbying to postpone elections to allow women’s groups and their allies greater time to organize.

With crowds still amassing in Tahrir Square, incensed by the death of a protester on Saturday, it is unclear if the demonstrations will continue through the Monday and whether the elections will be held. Either route–the scheduled election or an extended transition–presents its own challenges for women’s rights organizers in Egypt. Delay may give women more time to organize, but it poses the risk of further threats to the security of women protesters such as Eltahawy.

To follow developments in Egypt and to learn more about women’s roles in the uprising, check out some further reading:

Amnesty International’s Statement: “Egypt Admission of Forced ‘Virginity Tests’ Must Lead to Justice”: on the army’s forced virginity tests on women activists, whom it claimed “were not like your daughter or mine”

Mona Eltahawy’s latest: “Egypt’s Naked Blogger is a Bomb Aimed at the Patriarchs in our Minds”: on trail-blazing artist, blogger, and feminist Aliaa Mahdy’s defiance of Egypt’s sexual norms

Photo: Leila (name changed to protect her identity), an unemployed graduate of Cairo University, participated on the front lines of the 2011 Egyptian Revolution and was hit with a rubber bullet by police.  Copyright 2011 Anna Therese Day.