The Next Wangari Maathai? - Ms. Magazine
Skip to content 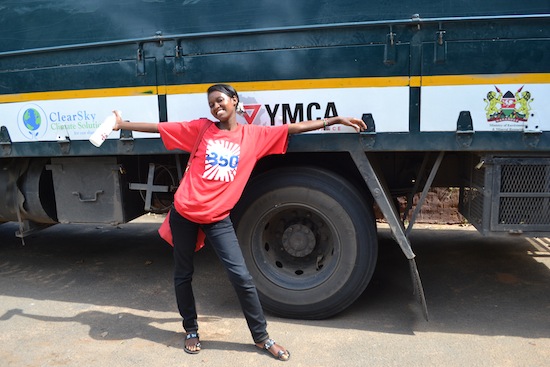 “I thought about her a lot on the long truck rides from Kenya to South Africa,” says Winnie Asiti, a 25-year-old Kenyan environmental activist, of her mentor, the late Nobel Peace Prize winner Wangari Maathai. “I thought about my peers teasing me and calling me a treehugger, and how I told them, just wait and see: I am going to be the next Wangari Maathai.’”  She smiles. “I guess now is my time. Call me a treehugger. Tease me if you want. I am going to help save Africa, and I need the people of the world to join me.”

Asiti’s truck was headed for the United Nations Global Conference on Climate Change in Durban, South Africa, a momentous conference of global leaders charged with negotiating a treaty to address the urgent problem of climate change. On Friday, talks went into overtime when world leaders failed to agree on a plan to reduce carbon emissions.

Asiti brought with her a youth-led caravan to speak up for Africa’s youth at the conference (young people make up three-quarters of the continent’s population). On the road to Durban, they traveled through six countries, holding massive climate-justice concerts in each and stopping locally to connect with communities and gather stories.

“People across Africa asked us to be their ambassadors in Durban–to share their stories with leaders from around the world and demand they act now,” says Asiti. “Sometimes we would pull [the bus] away from a community meeting and I would just feel overwhelmed because people put so much hope in us.”

That is why, in Durban, Asiti has been racing the hallways, running from meetings to press conferences to panels. An outspoken leader, everywhere she shares people’s stories and calls for the United Nations to act now.

She tells attendees that her hometown was once the breadbasket of Africa, producing enough to feed all of Kenya and a surplus to export to neighboring countries–but all that has changed.

It used to be we knew exactly when the rain season would come. We had one long season and one short. Now they are totally unpredictable. Sometimes we have to plant up to a month late, and many crops–including the trees we use for our cooking–just are not growing very well anymore. Some women spend half their day just trying to gather enough wood for their household and struggle to put enough food on the table.

Like her mentor, she approaches environmental justice from an ecofeminist perspective. Standing in front of a room filled with young people, Asiti raises her voice to say,

Look, people in my community are suffering, especially woman and girls. We are the ones that collect the water, do the cooking, gather the fire wood and do the farming at home, so we are the ones that are bearing the brunt of these changes in our climate.

Asiti has started a program in Kenya through an international climate change organization called 350.org and the African Youth Initiative on Climate Change (AYICC). Its aim: to raise awareness about the effects of climate change and provide community members with the resources to adapt. With her volunteer team of youth activists, she conduct educational workshops in women’s circles, teaching them about drought-resistant crops, water-saving methods and efficient new stoves.

“Once women are empowered, half the problem is solved,” says Asiti. “But we need a global community to raise up and stand with us to demand that our leaders act boldly.”

She takes a deep breath and says,

If our leaders don’t do the right thing on this issue, we are just going to make our voices louder. Because if we don’t adjust to the realities of climate change, we will die. I am going back home fueled with the energy of the people I met on this journey, and I will build a movement large enough that the world will hear us!

Wangari Maathai would be proud.

Heather Box is a writer, activist and trainer who works in partnership with change makers around the globe to support their campaigns, grow their networks and share their stories. Her education in journalism and social economics laid the groundwork for her work as a writer and social justice organizer. Over the past ten years she has worked in the youth movements in the United States, Spain, Sri Lanka, Japan, Australia, Argentina, Vietnam, South Africa and Uruguay on issues of civic engagement, climate change, human rights and immigration. Heather is the founder of the Million Person Project, an international project about love, globalizing relationships and supporting change makers. The first phase of this project launched in September 2011. She is working with climate change activists from Vietnam, South Africa and Uganda to convene youth workshops, conduct story telling trainings and write about the central force driving young activists around the world to act for change.