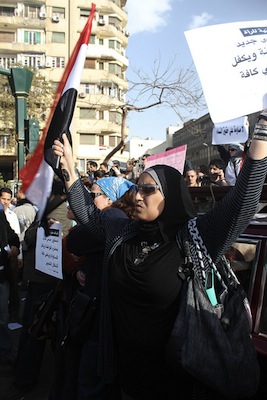 The results are in, and the news is official: Not a single woman has been directly elected in Egypt’s first round of elections for the lower house of Parliament. And it appears that only three or four women are likely to gain seats when political parties fill their quotas in January.

The first of three rounds of elections for Egypt’s lower house of Parliament took place at the end of November in nine of 27 Egyptian provinces, including the major cities of Cairo and Alexandria. Elections proceeded as planned despite violent clashes between police and protesters in Cairo’s Tahrir Square, as well as sporadic violence across the country and several organized boycotts. Over 50 percent of eligible Egyptian voters participated, and news outlets reported a notably large presence of Egyptian women voters.

Women also made up about 30 percent of all Egyptian parliamentary candidates, most running as independents rather than on a party ticket. Along with the high turnout of women voters, that would seem grounds for feminist optimism. But all of the women running as independents in the first round of elections lost, including media personality and activist Gameela Ismail, one of only a handful of self-identified feminists running, and the candidate whom many saw as the woman most likely to be elected.

Egypt has an elaborate electoral system that is part direct and part by party. On each ballot, Egyptians vote for two independent candidates as well as a party. One-third of Parliament is made up of the independent candidates, and another two-thirds are drawn from party lists, based on the proportion of votes each party receives.

However, when the final party-list results are announced in January, they are likely to add only a few women to the 498-member lower house. New election laws repealed a previous stipulation that Parliament be 12 percent women, instead merely requiring parties to include one woman on each of their lists. This led to party lists that were, on average, only 6 percent female. Moreover, the new law did not specify where women fell on the list, and placement is everything: Each party’s share of parliament members will be drawn from the top of its lists.

However, it was the more conservative Islamic and Islamist parties that had the greatest success at the polls, and these tended to put women low on their lists. For instance, the Salafist Islamic Al Nour party, which won nearly 25 percent of the vote, placed women on the very bottom of its lists to ensure they would not see political office, publicly stating that women’s inclusion was “evil” and that they had been “forced” to include these names by law. In contrast, moderate Islamist party the Muslim Brotherhood, which won almost 37 percent of the vote, touts its inclusion of women, known as the Muslim Sisters. The fourth female candidate with a chance to reach parliament is Dr. Omayma Kamel, a Muslim Sister placed fourth on the Muslim Brotherhood’s Freedom & Justice Party (FJP) list in Cairo’s fourth district. Even if she is seated–the FJP will need to win four seats in her district for that to happen–many secular activists wonder if such women’s power will be limited, noting that women do not hold leadership positions in the Muslim Brotherhood.

Overall, liberal parties placed women higher on their lists than their Islamist and Islamic counterparts. Three secular seats for women have been potentially secured through such placement, according to the The Egyptian Center for Women’s Rights. The secular nationalist Wafd Party has promised two top seats for women in Cairo and Damietta, and the Egyptian Bloc included Sana’a El-Said, a female candidate from Assuit, on the top of their winning list.

Together, the Salafist Al Nour Party and the Muslim Brotherhood won upwards of 60 percent of the vote in the first round of elections, which included Egypt’s most secular regions: its cities. As the second round of voting, which concludes today, and the final round, scheduled for January 3, both occur in more rural provinces, Islamist and Islamic parties are expected to win by even greater margins over the fragmented, secular opposition. In light of these trends, the prospect of women’s participation in Egypt’s new Parliament appears bleak.

The role of the first parliament will be to draft a new Egyptian constitution, guiding the transition into “The New Egypt.” Under the transitional authority of the army, women were initially excluded from the first constitutional committee, and, based on the first round of election results, women may not gain significant representation through electoral politics. Secular women’s organizations have been particularly concerned about the exclusion of women from the crafting of the constitution, which could mean that women’s rights are not codified there, allowing conservative laws to be enacted.

Salafist parties have advocated significant conservative reforms to assert the “Islamic character” of the state. Their platform has included assaults on individual rights (women’s dress, for example) as well as implementing different educational curriculum for girls and boys in public schools. The Muslim Brotherhood, on the other hand, claims that it will respect individual rights, but even its Muslim Sister members have called for separate roles for women in Egyptian society. Secular Egyptian women worry that these demands will nudge working women back into the domestic sphere and discourage women’s higher education.

“Giving the Islamists’ electoral victory, women’s rights will go from bad to worse,” says Egyptian journalist, Dina Sadek. Sadek articulates her frustration, however, with Egypt’s secular parties. “While the liberals fought amongst themselves, the Islamist parties were well-organized and united under mutual goals. You can’t blame the Islamists for working hard.”

Sadek hopes that these early Islamist victories will backfire in the long run. “When people see that their only accomplishment is the implementation of Sharia law or the oppression of women instead of focusing on the real issues, like poverty, unemployment, the people will rise against them.”

Feminist Egyptian writer Zainab Magdy also voiced this hope for an Islamist implosion, but worries about the regression of women’s rights in the meantime:

The entirety of Egyptian society has seen the power of our women in the Revolution. They know that we played a pivotal role in toppling Mubarak, and no one can deny that power. But the Islamic bloc saw this too, so pushing women out of politics into ‘their proper role under Islam,’ which I can only assume means ‘the home,’ will be a top priority in consolidating their power. Many people expect this to backfire, but I worry what the cost will be to women in the meantime.

After the third round of lower-house elections on January 3rd, the final results for the lower house are expected by the end of January. The three rounds of upper house elections are scheduled for January 29, February 15 and March 4. The military recently announced that the Egyptian presidential election will occur in June of 2012, with a transfer to total civilian leadership in July of 2012.

Photo of an Egyptian woman in Tahrir Square by Al Jazeera English under Creative Commons 2.0