Why I Support the Affordable Care Act - Ms. Magazine
Skip to content 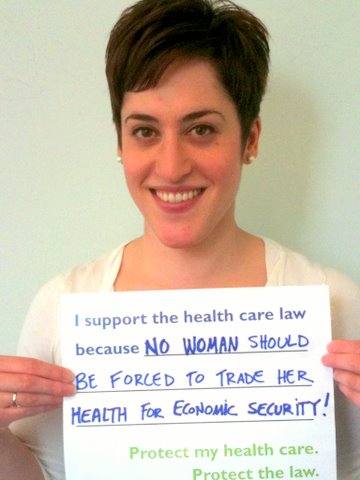 As the Supreme Court begins hearings that could spell the dismantling of the Affordable Care Act, the Ms. Blog will highlight what the act has done–and will do–for women. Here, Amy Cotton tells of a life that could have been saved by the ACA.

This time of year, it’s impossible to avoid the wall-to-wall displays of colorful Easter candy, including Peeps, those sugar-coated marshmallow chicks and bunnies. I can’t look at Peeps without smiling and recalling one of my mentors who nearly lived on sweets, an actor and teacher at a theater near where I grew up. Peeps were among her favorites. She was cheerful and comforting and played a big role in supporting my emerging self-confidence and drive for social justice work.

When I went home to attend her funeral in 2009, the sense of loss I felt was compounded by the tragedy that surrounded her death. She had delayed seeking health care when she first thought something was wrong, because it was just too expensive. Though she was a unique spirit, it turned out that my mentor couldn’t buck some troubling trends—that women are more likely than men to forgo needed health care, including preventive care, due to cost; that women report more difficulty paying medical bills than men; and that women are more likely than men to be underinsured. It also turned out that she was right when she suspected something was wrong. But, since she couldn’t afford care, she ignored the signs of colon cancer, which took her life in just about a year. She was only 46 years old.

Her story, through dramatic (she was a drama teacher, after all), is not uncommon. Yet, it is just one example of why ensuring that every individual can access health care when they need it—not just when it fits a constrained budget—is so critical. And it’s one of the many reasons why I support the Patient Protection and Affordable Care Act (ACA), the 2010 health care reform law.

Thanks to the ACA, millions of women now have, or will soon gain access to, preventive care without added cost. It’s going to be easier for women to get the care they need when they need it. Mammograms, Pap tests, well-woman visits, cancer screenings, contraceptives and even domestic violence screenings will be covered at no cost as part of the regular set of preventive services women can draw upon to stay healthy.

Thanks to the ACA, a women won’t be charged more for her insurance simply for being a woman, nor will she be subjected to annual or lifetime limits on the coverage she can use. This alone is a huge benefit to the many women who find themselves or their families fighting serious illness or chronic conditions. No longer will women, children, or members of their families be denied coverage for pre-existing conditions.

The list of benefits from this new law goes on, and each will have a positive impact on real people like me, like my mentor’s family—and like you. Yet even as we celebrate these benefits, the U.S. Supreme Court is hearing arguments from opponents of the ACA who seek to take these lifesaving advances away from women and their families.

To celebrate the key benefits and consumer protections provided by the ACA—and to advocate for its long future—the National Council of Jewish Women has started a “photo petition” designed to help you show your support for this great advance for women, children and families. I support the health care law because no woman should have to trade her health for her economic security and because leveling the playing field and making care more accessible was—and is—the right thing to do. Were she here, I know my friend and mentor would agree.

Share why you support the health care law! Submit your own image–your voice can make all the difference.

Reprinted with permission from the NCJW Insider. Photo of Amy Cotton.

This post is part of the #HERVotes blog carnival. #HERvotes, a multi-organization campaign launched in August 2011, advocates women using our voices and votes to stop the attacks on the women’s movement’s major advances, many of which are at risk in the next election.