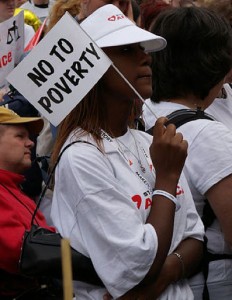 Today, more than 17 million American women are living in poverty, and more than 7.5 million of those in extreme poverty–meaning that they survive on less than $5,672 a year. Female-headed households are really hurting: Forty percent live in poverty. These women and their families aren’t numbers. They may be you, me, our families or our neighbors. In the current economy, many of us are only one paycheck or one illness away from poverty.

Throughout history, the most effective way to control women has been to keep them barefoot and pregnant–and, I would add, poor. After all, poor women are too busy trying to make ends meet and keep their children housed, safe and fed to challenge authority. As Secretary of State Hillary Clinton recently noted, “It doesn’t matter what country they’re in or what religion they claim. They want to control women.”

A chance for women to challenge that control will come May 10-13, in the form of the first U.S. World Courts of Women (WCW), to be held at Laney College in Oakland, California.

There have been 37 similar courts since 1992, held in Asia, Africa, the Middle East, South Eastern Europe and Latin America. These courts have addressed issues ranging from trafficking to resistance to wars to inheritance and property rights to wars against women.

The U.S. Court will call attention to the reality of poverty in our own backyard. The courts will take the form of public hearings where women can share stories of survival and resistance. The goal is to create “a platform to elevate the plight of women and create a new vision for the future,” explains Ethel Long-Scott, executive director of the Women’s Economic Agenda Project (WEAP), the lead sponsor of the Court. While the courts have no legal authority, they have moral authority, says Long-Scott: “We expect the verdict to point to a higher level of justice than the government has had the courage to administer.”

The days leading up to the Court will be filled with roundtable discussions, workshops and seminars to create a context for the testimonies. At the Court itself, women will testify about the impact of poverty on their lives, and after each session a panel of jurors will draw conclusions and recommendations.

Don’t worry, it’s not all somber and distressing testimony; there will also be art, music and other entertainment.

If you’re in the area, get involved. Even if you’re not in the area, you can still get involved. You can join a committee, get organizations you’re a part of to sponsor or endorse the Court, tell your friends about it, blog about it or share it on Facebook. It’s sure to be educational, inspirational and transformational.

As Ethel Long-Scott reminds us, “Elevating the abolition of poverty as part of the national discourse is urgent. [It’s] a tall ambition, but who better [to do so] than those who have been considered the least of us?” If we really work at it, we may be able to consign poverty to history’s dustbin.