17-Year-Old Imprisoned for Failing To Testify Against Her Alleged Rapist - Ms. Magazine
Skip to content 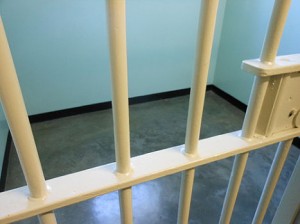 Update 4/17/12: After more than three weeks in juvenile detention, the victim has been released with a GPS ankle bracelet. She is scheduled to appear in court on April 23.

In Sacramento, a county judge has taken “victim-blaming” to a whole new level, ordering that a rape victim be jailed while awaiting the trial of her rapist.

The 17-year-old had failed to appear for two previous court dates to testify against Frank William Rackley, 37, who is accused of abducting and raping her and is believed to be a serial rapist. Judge Lawrence Brown claimed to be “terribly sorry” about the position the young woman is in, but his sympathy didn’t stop him from ordering that she remain in a juvenile detention center until April 23, Rackley’s next trial date.

Rape trials are notoriously traumatic for victims; frequently, the attempts to discredit a rape victim’s credibility and character leads her to feel that she is actually the one on trial. Victims’ fear of further violations they will receive at the hands of the justice system—from inappropriate and irrelevant questions about their sexual histories to accusations that they are simply lying—is undoubtedly one of the many reasons why rape is already one of the most underreported crimes, with only 46 percent reported to police and only a small fraction of those ultimately going to trial. And it is highly likely that fear is precisely what prevented this young victim from showing up for two previous court dates. But rather than striving to create an environment in which she could testify comfortably and safely, Judge Brown decided to take punitive action against her instead.

It is difficult to imagine the victims of any other crimes being made to feel that they are at fault for their own victimization. Imagine a lawyer claiming that a person was “asking” to be robbed because he lived in an attractive home. Or a judge deciding that because an individual had previously allowed friends to borrow his car, he had no right to complain when his car was stolen. Yet this kind of victim-blaming is commonplace when women come forward to report sexual violence and find themselves facing interrogations about their attire, sexual histories and behavior.

It is reasonable for judges and prosecutors to be concerned about women refusing to testify against rapists; such testimony is obviously vital in bringing perpetrators of sexual violence to justice. But if we wish to give more victims the courage to come forward, the solution is certainly not to threaten them with incarceration. The only way more survivors of sexual violence will be empowered to seek justice is if we create a culture and a legal system that do not engage in victim shaming. Women need to be able to speak out about sexual violence without fear that she’ll be blamed, ridiculed and disbelieved. A culture in which victims are silenced by fear and shame is one in which sexual violence can continue to occur with impunity. By imprisoning a victim, Judge Brown has done nothing to encourage women to testify against perpetrators of sexual violence. Instead, he has added the threat of jail time to the list of reasons why women might be too frightened to report sexual assault in the first place.

Kristen Clarke to Join Justice Department: “We Will Turn the Page on Hate”

Moving the Apostrophe in Mother’s Day: Helping Mothers Around the Globe
Voices from Kabul, Afghanistan: “You Can Take Our Lives, But Not Our Education”
Mother’s Day Flowers That Reflect the True Value of a Mother’s Work: $800 Billion