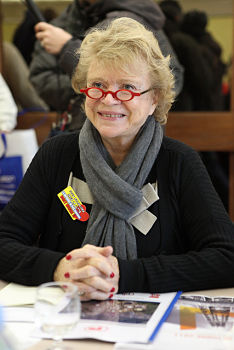 Women account for 53 percent of French voters but there’s little to suggest they will pack their punch behind any single candidate in the first election since the sex-harassment scandal that dashed the presidential hopes of former IMF chief Dominique Strauss-Khan.

On April 22, French voters will choose among 10 presidential candidates, three of whom are women: Marine Le Pen, Eva Joly and the extreme-left-wing Nathalie Artaud. Unless one candidate claims more than 50 percent of vote, the top two will face a second ballot. Most polls predict a face-off between the candidate for the Socialist party, Francois Hollande, and the incumbent, President Nicolas Sarkozy.

Le Pen, candidate for the extreme-right-wing party, the National Front, is also seen as a serious contender. Often described as “the least feminist candidate,” she nonetheless managed to feminize the electorate of the Front National, which was male-dominated when her father Jean-Marie Le Pen was its president.

Of all the candidates, Hollande is considered the most attentive to women’s special interests. In a February survey by CSA and the women’s magazine Terra Femina, he earned 15 percent of respondents’ vote as the strongest proponent of women’s rights. Left-wing candidate Joly, of Europe-Ecologie, won 10 percent. Sarkozy, of the right-wing UMP, earned 9 percent, Marine Le Pen 8 percent.

While the Strauss-Khan scandal may linger outside the country, it has been largely forgotten by the French public and Strauss-Khan’s Socialist party, says Clemence Helfter, an activist with Paris-based Osez le Feminisme or “Dare Feminism.” “From the beginning the party diminished DSK’s actions and its importance.”

Strauss-Kahn was a strong favorite to unseat Sarkozy in the election until his arrest in New York in May on sex assault charges.

On the spectrum of women’s issues, French voters give priority to pay equity, the protection of abused women, pensions for mothers who gave up work outside the home and assistance to single mothers, according to the CSA/Terra Femina study.

France legalized medical contraception in 1967, abortion in 1975. In contrast to the United States, neither are highly politicized issues in France. Le Pen has stirred controversy as the field’s only candidate opposed to some form of public funding or subsidy of abortion. She has denounced “abortions of convenience” among women who undergo more than one procedure.

Women’s rights advocates have brought demands to left-wing parties that have helped define their positions, says Helfter of Dare Feminism. “This is not the result of a spontaneous action but rather the consequence of coordinated actions led by feminist movements to add equality between men and women to the political agenda.”

Unlike in the United States, where the women’s vote is courted, French candidates make few overtures to women as a special voting bloc.

The socialist Hollande proposed launching a ministry of women’s rights to reduce gaps between men and women in all aspects of society. He suggested that parties that don’t respect gender parity forgo state funding. He also proposed pay-equity measures. Four pay-equity laws have been adopted since 1972, but they have not been properly, implemented according to studies and several women’s groups. The pay gap for French women is 27 percent. The World Economic Forum recently downgraded the county to 131st in its world ranking for gender pay parity.

Marine Le Pen reiterated her opposition to gender pay parity measures as subverting the principle of “the republican meritocracy.”