Women and the Egyptian Revolution: An Interview with Mona Eltahawy - Ms. Magazine
Skip to content 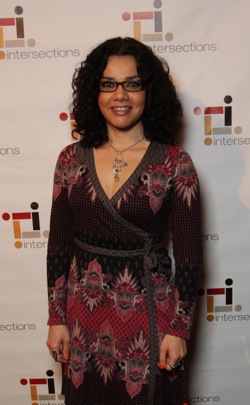 This week, a cover story in Foreign Policy magazine, “Why Do They Hate Us?”, ignited an explosion of praise, criticism and feverish discussion about women’s rights and gender equality in the Arab world. The piece elicited responses from across the globe and the political spectrum, cracking open one of the region’s most pressing issues–one that is often silenced, ignored or dismissed.

Yesterday, the story’s author, Egyptian American journalist Mona Eltahawy, joined Intersections International in New York City as the 2012 recipient of the Intersections Award. Presented to her by Ms. Global Editor Robin Morgan, the award honors those who have been voices for peace, justice and reconciliation during conflict and crisis. Eltahawy was chosen for:

…her bravery, strength and conviction in her work at the intersection of religion, culture & conflict, her incisive coverage of the Arab Spring, her use of social media to convene and create dialogue around Arab and Muslim issues, her resilience after being attacked and sexually assaulted in Tahrir Square, and her bold outspokenness on women’s issues around the globe.

Since the beginning of the 2011 Egyptian revolution, Eltahawy has been writing, speaking and Tweeting nonstop, providing Western audiences with an on-the-ground account of events and a feminist perspective. It has been a tumultuous year: Egypt has seen a president ousted; a provisional constitution adopted; popular uprisings against the military government; sexual assaults of protesters (including Eltahawy) by Egyptian security forces; civilian massacres and parliamentary elections. Now, the country is gearing up for May presidential elections.

Ms. contributor Anna Therese Day spoke with Eltahawy about what the revolution means for Egyptian women and what the future holds. Here’s a bit of their conversation (you can read more in the next issue of Ms.!)

Anna Therese Day: What brought you to feminism?

Mona Eltahawy: To move to Saudi Arabia from the U.K. at the age of 15 as a girl was incredibly difficult. It taught me that there are many Islams, not just the Islam I was brought up with. It also forced me as a woman to find ways to push back against that misogyny and patriarchy that were so apparent in Saudi Arabia. After years of struggle … I found women like Nawal El Saadawi and Fatima Mernissi and other feminists. This is where the seeds of my feminism were planted. Then I took them to Egypt, where they continued to grow, and then I moved to Israel. Watching the ultra-orthodox and secular Jews around me reminded me of the Salafis in Saudi Arabia, especially when it came to women.

Then I came to the U.S. and I was able to find a Muslim community that was progressive and liberal in its outlook, [where] I felt very much at home. But I recognized that here in the U.S., the right-wing-religious fundamentalist views on women connected right back with ultra-orthodox Saudi views and ultra-orthodox Jewish views. Now it’s much easier to see [feminism] as a global thing, where I have much more in common with a feminist who’s fighting patriarchy anywhere than I do with the ultra-orthodox misogynistic zealots of my own religion.

You’ve been covering not just Egypt but other Arab Revolutions very closely. What do you find most hopeful about the past year? What are the greatest points of opportunity and is there a single moment that exemplify this spirit?

On International Women’s Day this year, I went back to Egypt especially to [join a] march and spent most of the march with Samira Ibrahim, the 26-year-old woman who is suing the [Egyptian] military for so-called ‘virginity tests‘ which is in and of itself amazing. We found walking with us another woman who I think is even younger than Samira, [named] Aleya. We got to a point with 10 soldiers standing behind barbed wire. This young woman was holding a sign that said “50%,” which was one of our demands: that at least 50 percent of the constituent assembly be comprised of women.

Aleya reaches this barbed wire and ten soldiers and goes right up to them and says “Let me pass.” They say “No.” She says, “I’m not going anywhere until you let me pass.”

[The soldiers] look at the supervising officer, and he realizes that she’s determined. She’s utterly tenacious, and she’s not going any where. He says: “Let her pass.”

They actually lifted the barbed wire and let us pass because of this 24-year-old woman who insisted on forging ahead. It was exhilarating.

It is that spirit that keeps the revolutions in the Middle East and North Africa going in a part of the world. When you are infected with that spirit, no one is going to defeat you.

Photo by Anthony Alvarez of Eltahawy at the April 26 Intersections awards ceremony.

Update: A mention of Bothaina Kamel was removed, as she dropped out of the race soon after the interview. 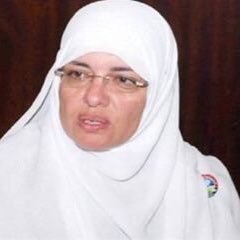