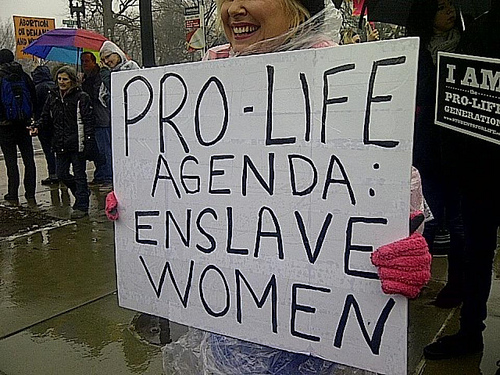 Update 6/12/12: Gov. Bobby Jindal signed the 20-week abortion ban into law Monday, June 11. On June 8, he also approved measures requiring a 24-hour waiting period before an abortion, an audio of the fetus’ heartbeat to be played and for the procedure to be done by a physician.

It’s June, and we know what that means: Another month, another 20-week abortion ban.

This latest foray in the War on Women comes from Louisiana, where the House and Senate voted near-unanimously on Friday to prohibit abortion from 20 weeks after fertilization. S.B. 766, the “Viable and Pain-Capable Unborn Child Protection Act,” is expected to be signed into law by Gov. Bobby Jindal, who has an anti-choice record.

S.B. 766 does not include rape or incest exemptions. Originally it did not make an exception for the life of the mother, but the Louisiana State Medical Society successfully petitioned state Senate President John Alario to remove penalties from doctors who perform life-saving abortions. Abortion providers found to be in violation of the law are subject to fines and a maximum prison sentence of two years.

With this law, Louisiana becomes the tenth state to to challenge the 24-week viability precedent set by Roe v. Wade, taking the anti-choice path blazed by Nebraska in 2010 and followed by Alabama, Idaho, Indiana, Kansas, North Carolina, Oklahoma and this May, Georgia. Arizona lays claim to the most extreme abortion ban in the country—at 20 weeks from last menstrual period (which is the medically accurate way to date pregnancy).

Like its predecessors, the bill rests on the scientifically shaky concept that a fetus can feel pain at 20 weeks. During the House deliberation, backer state Rep. Frank Hoffmann said, “This bill means that if a child can feel pain, the child cannot be killed.” So-called “fetal pain” has been a long-standing anti-abortion talking point; however, medical research indicates that fetuses cannot feel pain at 20 weeks, or even 24 weeks. Many OB/GYNs have spoken out against 20-week bans, saying they endanger women. A number of serious or lethal congenital disorders, such as fetal heart defects, can’t be detected until well into the second trimester.

In addition to the 20-week ban, the Louisiana House voted in favor of a harsher ultrasound law, requiring a woman to receive a sonogram 24 (instead of two) hours before the abortion procedure. The bill (S.B. 708) also attempts to discourage women from having abortions by requiring doctors to offer to play the fetus’ heartbeat.

Louisiana is already home to some of the nation’s most draconian anti-choice laws, which mandate a biased in-person counseling 24 hours in advance (necessitating two trips to the clinic) and parental consent for minors. Ninety-two percent of Louisiana parishes (the equivalent to counties)—containing a majority of the state’s women—are devoid of an abortion provider. Soon, that figure may be 100 percent, thanks to the influx of TRAP laws from anti-choice legislators slowly squeezing Louisiana of its remaining handful of abortion clinics.