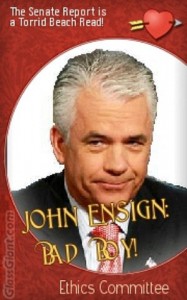 As Ms. magazine reported last summer in the article “Sex, Lies & Hush Money,” Sen. John Ensign (R-Nev.), a “pro-family” conservative, was forced to resign from office after a sex scandal involving his female campaign treasurer—the wife of his former top aide. In the cover-up of the affair, the names of other powerful male Congressional figures emerged, including that of Sen. Tom Coburn (R-Okla.), who is mentioned throughout a Senate Ethics Committee report [PDF] on its investigation.

Aside from resigning, Ensign has not been prosecuted for his role in a lobbying scheme to channel money to the treasurer, Cynthia Hampton, and her husband Douglas, Ensign’s former top administrative aide. Douglas Hampton, however, has now pleaded guilty to a one-count misdemeanor of illegal lobbying and faces up to a year in prison and a $100,000 fine (though his public defender said he would ask for no jail time). Hampton admitted that he lobbied Ensign–who now works as a veterinarian–shortly after leaving his Senate job instead of observing a year’s “cooling off” period.

As the New York Times points out, though:

Mr. Ensign … arranged tens of thousands of dollars in lobbying contracts for Mr. Hampton through Nevada political allies as a means of finding income for the aggrieved aide and containing the damage from the affair.

Sen. Ensign’s parents also gave the Hamptons $96,000 after they were let go from their son’s staff, and the ethics report found that Ensign had given false or misleading statements to the Federal Election Commission about the payment.

I think it’s an absolute outrage that Doug Hampton was the one prosecuted here while John Ensign has had nothing happen to him criminally or otherwise, except for having had to resign.

Meanwhile, on May 25, the Senate Ethics Committee “admonished” Sen. Coburn for being “intimately involved in trying to help the Ensigns and Hamptons reach a financial settlement that would stave off any public disclosure of … the past affair.” Coburn was also reported to have met with Hampton on legislative issues before the one-year cooling-off period for lobbying had ended.

And still, only the little guy has taken the fall.