Why the Bishops' "Religious Freedom" Argument Is a Lie - Ms. Magazine
Skip to content 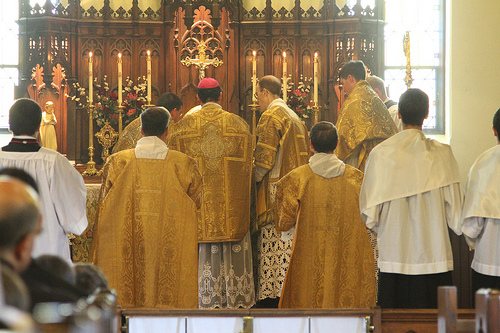 The recent Huffington Post article by Sister Mary Ann Walsh of the U.S. Conference of Catholic Bishops (USCCB) tells us quite a bit about the veracity of its claims that religious freedom is under attack in the United States.

Sister Walsh portrays Catholic institutions as just wanting to be able to give away services as acts of charity without government interference. But the truth is Catholic institutions (or those who claim to speak for them) are demanding they be able to participate in the economic market without having to adhere to the same standards as anyone else selling products or services, and to do it with government funding to boot.

The idea that some religious organizations should not have to meet the general standard has been widely accepted, but Sister Walsh finds the resulting exemption to the contraceptive coverage mandate, “miserly.” As the USCCB has told us repeatedly, the issue isn’t contraception, but religious freedom. The problem, they claim, is just that too few Catholic-affiliated institutions are exempt from the HHS regulation.

As Bishop William Lori, of the USCCB’s Ad Hoc Committee for Religious Liberty put it to Congress:

Now, there is a first-grader in plaid somewhere inside of me who hesitates to say this, but: this is a big lie. I know this is a lie because I read the USCCB’s Statement on Religious Freedom.

In the Statement, the Bishops quote Dr. Martin Luther King Jr., who quoted St. Augustine when he wrote that, “[a]n unjust law is no law at all.” I’ve found the frequency with which opponents of the contraception mandate quote Dr. King very odd, given that he supported family planning and once accepted an award from Planned Parenthood. But I couldn’t comprehend what was going on until I read the statement, in which the Bishops go on to say:

It is a sobering thing to contemplate our government enacting an unjust law. An unjust law cannot be obeyed. In the face of an unjust law, an accommodation is not to be sought, especially by resorting to equivocal words and deceptive practices. If we face today the prospect of unjust laws, then Catholics in America, in solidarity with our fellow citizens, must have the courage not to obey them.  (emphasis added).

The core of the bishops’ opposition to the contraceptive mandate is not that the exception is too narrow and will thus force Catholics to violate their beliefs. Rather, the law is unjust in and of itself because no one should use birth control. The Bishops keep quoting Dr. King because, to them, government regulation of even completely secular institutions aimed at making birth control more accessible is akin to a law enforcing racial segregation. Birth control is that bad, so an exception from a law making it more available will not do.

The stories behind Sister Walsh’s claim that “Catholic foster care and adoption services were forced to close” illustrate this point as well. Bishops in Illinois refused to negotiate for an exception to the state law banning discrimination against same-sex couples because, as one Bishop put it, “It would have been seen as: We’re going to compromise on the principle as long as we get our exception.” The problem wasn’t that Catholic agencies might have to serve gay couples — it was that any agency would.

Furthermore, Catholic agencies in Boston and San Francisco placed children with same-sex couples voluntarily until the Bishops made them stop. What the end of Catholic adoption services tells us is not that religious freedom is under attack, but that Bishops want to impose their will on the general population and don’t respect the religious freedom of Catholics working on the ground.

The Bishops may reject the choices made by voters and their elected representatives and lament that Catholics use birth control and form families in violation of their commands, but this does not mean their religious freedoms are being violated. Catholic bishops have increasingly looked to shape the law to control behavior through coercion where they have lost their power to persuade, but the ability to impose religion on others is not a right the First Amendment protects.

Sister Walsh may be correct, however, when she suggests the USCCB’s “religious freedom campaign” may ultimately be good for our nation. The “campaign” is showing Catholics, and the one in ten Americans who consider themselves  ex-Catholics, just how powerful the hierarchy that claims to speak for us is. It is showing us the bishops’ views are often extremist, lacking in compassion and disconnected from our values.  From the Nuns on the Bus to Melinda Gates we are hearing from other voices more and more.

I’m starting to think there’s some kind of Catholic awakening going on.

This post was originally printed in RH Reality Check.

Photo of Catholic bishops by Jim, the Photographer via Creative Commons 3.0

Bridgette Dunlap is a recent graduate of the Fordham University School of Law School where she was the President of Fordham Law Students for Reproductive Justice and a Crowley Scholar in International Human Rights at the Leitner Center for International Law and Justice. During law school, Bridgette worked at Legal Aid of Cambodia in its Women's Justice Program and participated in Fordham's Federal Litigation Clinic, focusing on sex discrimination litigation. Prior to law school, Bridgette worked for Brooklyn Community Services and founded the Ateh Theater Group. Bridgette's article, Protecting the Space to Be Unveiled: Why France's Full Veil Ban Does not Violate the European Convention on Human Rights is available in Volume 35, Issue 4 of the Fordham International Law Journal.