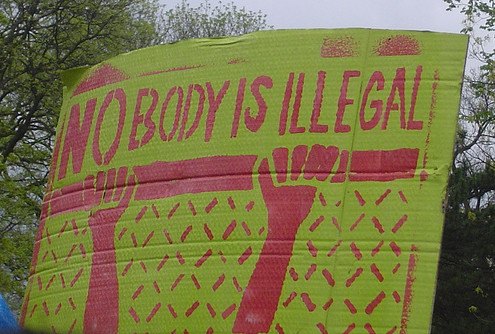 Winding through the South, a group of brave U.S. residents have “come out” in some of the most dangerous places in the country. As part of a “No Papers, No Fear” campaign, 30 men and women are riding a bus through key states to show they are ready to emerge from the shadows–as undocumented immigrants.

The group left last Monday from Phoenix, AZ, where the  immigration question has reached a boiling point. On trial there is Joe Arpaio, the Maricopa County sheriff accused of profiling Latinos and checking their papers in a class-action suit filed on behalf of every Latino pulled over by his force since 2007. And, of course, Arizona is the home of SB 1070, the controversial law which critics say encourages racial profiling.

The bus riders have also been to Colorado and Texas, and they’re heading to Louisiana, Alabama, Georgia and Tennessee, states notoriously hostile to undocumented immigrants. It’s a ride for justice, they say, and their UndocuBus will keep rolling all the way to the Democratic National Convention in Charlotte, N.C., which begins on Sept. 3.

According to the group’s website, the Democratic party will then decide if they should “include or exclude the undocumented leaders who will have braved so much to get there.” Though President Obama and the Democrats have promised immigration reform, Obama deported a record number of immigrants every year he’s been in office. But Obama’s June announcement that his administration will stop deporting some younger undocumented immigrants gives the UndocuBus riders hope.

In an op-ed in the Charlotte Observer, one of the UndocuBus riders, Leticia Ramirez, explained why she’s going to Charlotte:

We hope the president will be inspired by our example of courage. He has shown that he has the power to relieve our suffering. We’re doing what we must for our children to have better lives and for those of us who have lived in the shadows to finally be included fully in this country. We hope those who have the power to make that happen will do more to make it real.

One third of undocumented immigrants in the U.S. are women, a percentage that grew after the Immigration Reform and Control Act of 1986 granted 2.3 million Mexican immigrants legal status, wrote Patricia Zavella in the Winter 2009 issue of Ms. The immigrants who gained amnesty brought over wives and family members, and some women worked up the courage to migrate on their own, unauthorized.

Women immigrants fear separation from their children and other family members, and with good reason. Just because a child is legal doesn’t mean her or his mother is protected from deportation. The fear of being discovered as illegal pervades every part of undocumented immigrants’ lives. Now, instead of waiting to be found out, these modern-day freedom riders have made themselves public in order to put a face to the cause of human rights.