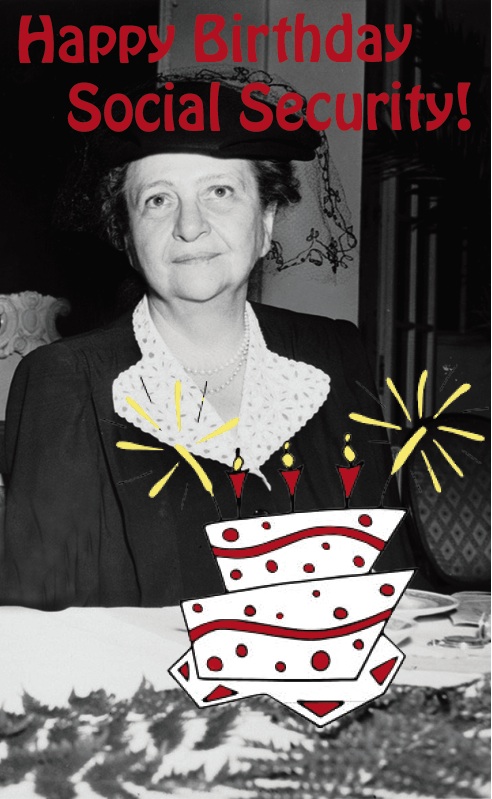 Social Security turns 77 years old today, but there’s hardly a wrinkle on the system. Sure, the government program has been a passionate talking point for numerous politicians over the last seven decades—with some eager to reform, privatize or dismantle it altogether—but Social Security continues to be one of America’s most successful anti-poverty programs. During the 1930s, the decade in which it was devised, at least half of American senior citizens lived in poverty; today, that percentage has dwindled to about 9 percent.

Known as the “godmother of Social Security,” Perkins, a hard-edged defender of the working class who also fought for minimum wage laws during her tenure, was instrumental in designing and enacting the Social Security Act of 1935. As chair of the Committee on Economic Security, Perkins was responsible for streamlining the legislation and overseeing the reports and hearings that eventually resulted in the landmark program.

Signed by President Franklin D. Roosevelt, the Social Security Act was meant to alleviate the growing financial burdens plaguing Americans—particularly the elderly, the unemployed and widows with children—during the Great Depression. Most women, however, were excluded from old-age pensions and unemployment benefits at the time, as employees were typically categorized as white men. (Widows were able to receive survivor benefits starting in 1939.)

A lot has changed over the past 77 years. Women might have been left without benefits in 1935, but Social Security has since expanded to universal coverage, regardless of gender and race, and gradually encompassed other anti-poverty and public health programs, including the State Children’s Health Insurance Program (SCHIP), Temporary Assistance for Needy Families and aspects of Medicare and Medicaid.

Considering that, without a federal equal pay act in place, women earn a significant amount less than men over their lifetimes, the need for Social Security for retired women intensifies. Though more full-time employed women (around 55 percent) are now enrolled in employer-sponsored private and public sector retirement plans, their pensions are significantly lower than their male counterparts’. As for annual Social Security benefits, men receive, on average, about $4,000 more than women because their payouts are calculated from lifetime earnings.

Experts suggest either counting up to 10 of those caregiver years and five additional earning years toward special minimum benefits, or not including the caregiving years in calculating average income.

With about 89 percent of senior citizens receiving Social Security benefits in all, and a stagnant economy that has resulted in record-high unemployment numbers, America’s retired workers cannot afford to be without this system. So on its 77th birthday, let’s honor Frances Perkins for her dedication to bettering the lives of the nation’s working class citizens and continue to look to the program’s future. As Social Security and its sister programs, including Medicare and Medicaid, endure more attacks in Congress, let’s make sure Social Security lives on to a much riper old age.