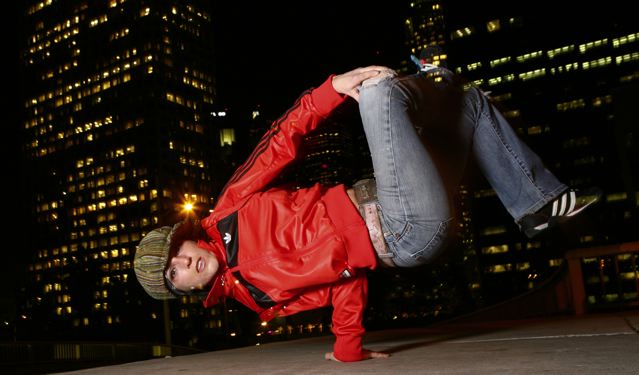 Ana “Rokafella” Garcia-Dionisio remembers glass on the floor and piss in the staircases of the 1970s Harlem and Bronx apartments where she grew up. “You had to be tough to survive,” she says.

It was at that moment in the Bronx when we witnessed the birth of hip-hop. From the sparks of hardship, struggle and adversity, an entire underground culture emerged, encompassing music, dance, art and style. And while hip-hop’s men have received most of the attention, women such as Rokafella have been there since the beginning, contributing to every facet of the revolutionary art form.

Rokafella was one of the first women to get a reputation as a “b-girl,” or break-dancer. B-boys and b-girls were named by pioneering hip-hop DJs Kool Herc and Afrika Bambaataa, who, at Bronx parties in the 1970s, extended break beats in their sets specifically for dancers. Breaking was later declared one of the four pillars of hip-hop, along with rapping, D.J.-ing and graffiti writing.

Rokafella earned her name by going up against the guys. She learned to spin around on her back with her legs flying out as she executed windmills, balance her body on her wrists and rotate in a circle like a frog and stand on her hands with her legs split open wide.

“It’s a certain kind of woman that gravitates to this dance,” she says. “It’s usually the one [who] wants to get in control of her life and of the perception of what a woman can do.”

That describes Amy “Catfox” Campion, an L.A.-based b-girl who has been part of a wave of women taking up the form in the last decade or so. Gender stereotypes have never appealed to Catfox, who rides a motorcycle, surfs and practices the Brazilian martial art of capoeira. “Rather than having people say [that] to be meek or mild-mannered or speak softly or wear pink [are] feminine, I would like to be able to define femininity as anything I do,” she says.

After graduating from the University of Washington in 1998 and spending several months dancing tango and salsa in Argentina, Catfox became frustrated with being constrained by the level of talent of the man leading her. She wanted to take the reins. So she took up breaking, where dancers perform alone and are only as good as the amount of time and energy they put into practicing. In 2006, she founded Antics Performance, a L.A.-based hip-hop dance/theater company.

Much like other women athletes, b-girls are rarely satisfied with their skills and thrive on competition. Since discovering breaking at university in London six years ago, Nadia Lumley has pushed herself to be the best breaker of any gender. Breaking requires extreme physicality, muscular strength—especially upper-body—and a confrontational attitude.

B-boys have told her she is less physically capable than a man, that she can’t perform certain moves. But Lumley disproves the doubters by doing everything the boys do. When she’s not traveling with one of several touring companies, she trains five times a week and does three sessions of gymnastics. “A body is a body,” she says. “If you find the correct, specific way to train your body and have good technique, then you can do anything.”

However, notes Rokafella, after a b-girl has polished her skills, she still must learn how to parlay her talent into opportunity. “Half the battle is mastering the hip-hop part; the other half is learning how to integrate yourself into the systems.”

When Rokafella was first starting out, men hit on her instead of acknowledging her desire to dance. They told her she didn’t have enough moves, that she was weak. Luckily, the skeptics only made her resolve stronger.

Many b-girls remember a moment when a single b-boy, or an entire crew, tested her. Rokafella recalls attending Asia One’s B-Boy 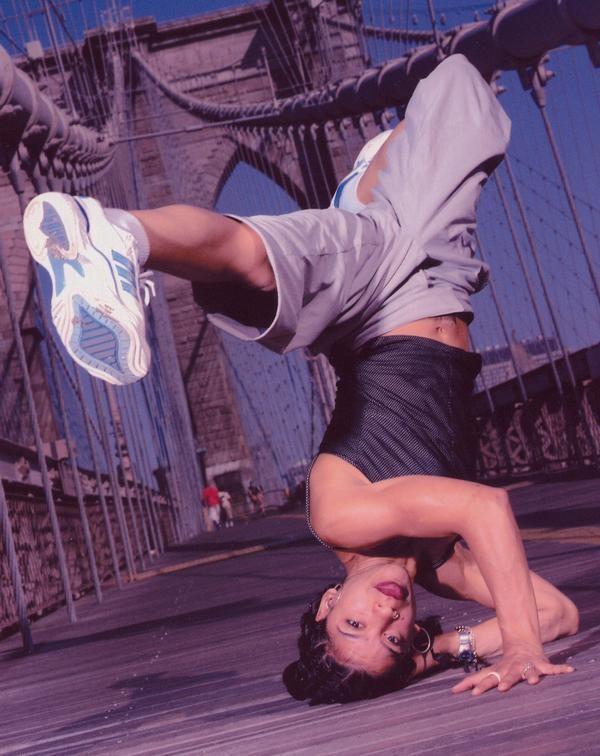 Summit in Hollywood–a semi-regular hip-hop event featuring breaking battles for prize money—in 2006 with her husband Kwikstep, an internationally known b-boy. At such events, trash-talking and one-upmanship are the norm. A crowd was beginning to form around Kwik with more than a few people “talking a lot of smack,” says Rokafella. Her adrenaline pumping, Rokafella jumped into the center of the circle. “I took off my jacket, and I handled mine and I handled his,” she says—conveying in few words that she beat everybody she faced.

Other b-girls agree that guys can be distracting, annoying, insulting or—more insidiously—create low expectations with false praise. “B-boys are constantly showing us far too much love and telling us that we are far better than we actually are,” says Lumley. “They start clapping when you do a handstand or a shitty backspin. If I listened to the boys, then I’d be half my level now [and] I’d have thought, I’m the shit.”

Not many women-only communities exist to support b-girls through these challenges, but some are beginning to pop up, such as The bgirl spot, a Facebook group that boasts 356 members around the world. On the site, b-girls bond over the obstacles they face, such as “boobs (always in the way)” and long hair (also in the way), while offering tips and support.

I know there’s a beauty in female camaraderie, but how can we get better if we put ourselves in a category, section ourselves off?

Some b-girls, including Catfox, would like to see more women-only battles with bigger cash prizes. Others, such as Lumley, prefer to compete with the guys. “There [are] a lot of lazy girls,” she says. “It used to frustrate me, but actually now I just think there are equally as many lazy, rubbish-level boys, too. It’s just [that] the girls are more obvious because there are far fewer of us.”

When women do meet up, guys often push them to challenge each other, which promotes a competitive attitude. Recently, a heated controversy has resurfaced in b-girl circles over how to dress: sexily or functionally? Girls who choose the former, wearing short-shorts and shoulder-baring shirts, say they value freedom of expression through their dress and resent being judged. Girls in the latter camp, like Catfox, believe that flaunting one’s body is a cheap ploy to get attention from the mostly male judges. “One of the things I love and appreciate about hip-hop is the idea of being respected for your skills,” she says. Her uniform usually consists of long sleeves, pants and a hat: the better to perform on the floor without getting knee or elbow burns.

These “how-to-dress” debates intensify when money is at stake, and dancing is a b-girl’s bread and butter. “I’m not commercial enough,” Lumley says about losing print, TV and screen gigs to more scantily dressed dancers. “I wear far too many clothes. I don’t have fake, long hair and false eyelashes. They want you to wear tiny shorts and cropped tops. They generally pick the look over the level.”

“[In breaking], you’re going to sweat,” says Rokafella. “You’re not going to be clean. You won’t have pretty nails. What counts is that you outdo the person who went before you. Earn your respect, and that’s going to last way longer than any lipstick you can buy. Hip-hop is telling us you can be broke and your spirit is beautiful.”

To capture that spirit in 2005, funded by a Ford Foundation grant, Rokafella planned and filmed the book tour for We B*girlz, photographer Martha Cooper’s celebration of b-girls. Rokafella scheduled events in six cities, documented them and edited the 45-minute film All the Ladies Say, covering issues ranging from how the media views b-girls to how futuristic and forward-thinking hip-hop can be to how b-girls juggle dancing and motherhood.

That last is a major challenge for some b-girls, much as it is for other women in competitive fields. Amelia “BgirlRezolute” Estrella had to put her life as a b-girl on hold for several years because of back-to-back pregnancies. Returning to dancing, she says, has meant “literally starting from scratch again.” In contrast, Rokafella has deliberately chosen not to have children, believing that “it’s challenging to come back 100 percent.”

Even for b-girls who don’t choose childbearing, burnout is common. Catfox speculates that women may be less tolerant than men of the unstable lifestyle. B-boys and b-girls don’t earn much money unless they are sponsored by companies or booked regularly for commercial work. That often means a lower standard of living–staying at a parent’s home or cramming with multiple roommates–in exchange for the freedom to travel and compete.

Catfox, however, is adamant that she won’t stray from the path. “When I found breaking, it felt right,” she says. “I’ve been breaking for 13 years, and I still consider myself a beginner. No matter what happens in this dance, I plan to keep doing it until I’m 100. I do it for me, myself and I.”