What's the Connection Between Violence Against Women and Our Prison Nation? - Ms. Magazine
Skip to content 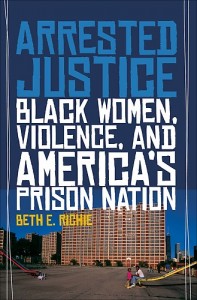 As CeCe McDonald lingers in jail for being a Black transwoman who defended herself in a public space, and Kelley Williams-Bolar is convicted of a felony for sending her children to a higher-ranked Ohio school district in which she did not reside, it’s time to read Beth E. Richie’s  Arrested Justice: Black Women, Violence and America’s Prison Nation and critically reevaluate pathways for building the world we want–one that leaves no one behind.

Centered in Richie’s more than two decades of work within the violence-against-women movement, including radical feminist-of-color organizing such as INCITE! Women of Color Against Violence, Arrested Justice charts how the mainstream was won but the movement lost. Why–with thousands of shelters for women, training for police on how to recognize domestic violence and eight professional journals that publish scholarship on violence against women–are women, particularly those of color, still harmed by men? Why are our prisons and courts overflowing with poor people–including our black, First Nations, Latino, non-citizen and/or queer neighbors–and yet people do not feel any safer? And how is it that the multiple and overlapping forms of violence that impact many marginalized women–particularly transwomen and/or black, Latino, First Nations, queer and disabled women–do not count as violence or harm?

In an escalating prison nation within the U.S., Richie’s engagement with these questions is a meticulous and profound reminder of what CeCe and Kelley already know:

Women of color from marginalized communities who experience violence are made more vulnerable by the operation of a prison nation.

To explore the shift in the anti-violence movement from a radical to a reform movement, Richie outlines how early organizing tactics emphasized the “everywoman” strategy: Every woman could be a victim of violence. However, this tactic accepted the impossible–that violence could be separated from heteronormative, capitalist, patriarchal, white supremacist actors, policies and environments–and placed all accountability on individual men and an unjust criminal justice system. For Richie, the long term consequences of these tactics resulted in a movement that “has responded to some of the problems of male violence but has ignored those which are conceptually written out of what we understand our work to be.” Anti-violence organizations and laws focus overwhelming on acts perpetrated by individual men, generally hold up “law and order” policies as the response and are often unable to see how poverty, militarism, the prison industrial complex and/or white supremacy  harm communities and shape many, including men, to injure people. These systems also frame which bodies count as women and who deserves the state’s “protection.”

Richie pushes beyond definitions of violence that center on interpersonal harm to capture other forms of violence and harm, including negative media images, the denial of the significance of victimization, encounters with public agencies that are degrading, victim blaming, lack of affordable housing and more. Arrested Justice also explores the relationship between building the U.S. prison nation and the mainstreaming of the anti-violence movement. Outlining various pre-conditions, including the persistent criminalization of black women, Richie demonstrates how the institutionalization of a violence-against-women movement scaffolded “tough on crime” policies. For example, while the 1994 passage of the Violence Against Women Act (VAWA) was seen as a victory by many, VAWA was part of a larger piece of legislation, the Violence Crime Control and Law Enforcement Act, that expanded policing and prisons and stripped those locked up of the right to access post-secondary educational Pell grants. The “law and order” frameworks that enabled women to punish (some) male perpetrators and for (some) women to garner measures of “protection” from the state also supported the largest prison expansion in the world.

Richie tracks how the institutionalization of the movement also required a parallel professionalization of research and scholarly analysis, a salient reminder for many whose work lies between justice movements and universities. Drawing from radical black feminist thought and activism that places women of color at the center of organizing and analysis, Arrested Justice provides a strong counter-history of a movement that struggled to create safe and secure communities.

With examples from the lives of women Richie works with and alongside, Arrested Justice is a must read for  organizers and theorists. Social movement analysis conducted by scholar-activists who are in it for the long haul are rare, yet it provides some of the most politically useful and engaged reading. Richie’s generous and rigorous writing comes from a commitment to community and justice, and from ongoing work alongside people and organizations that continue the struggle.