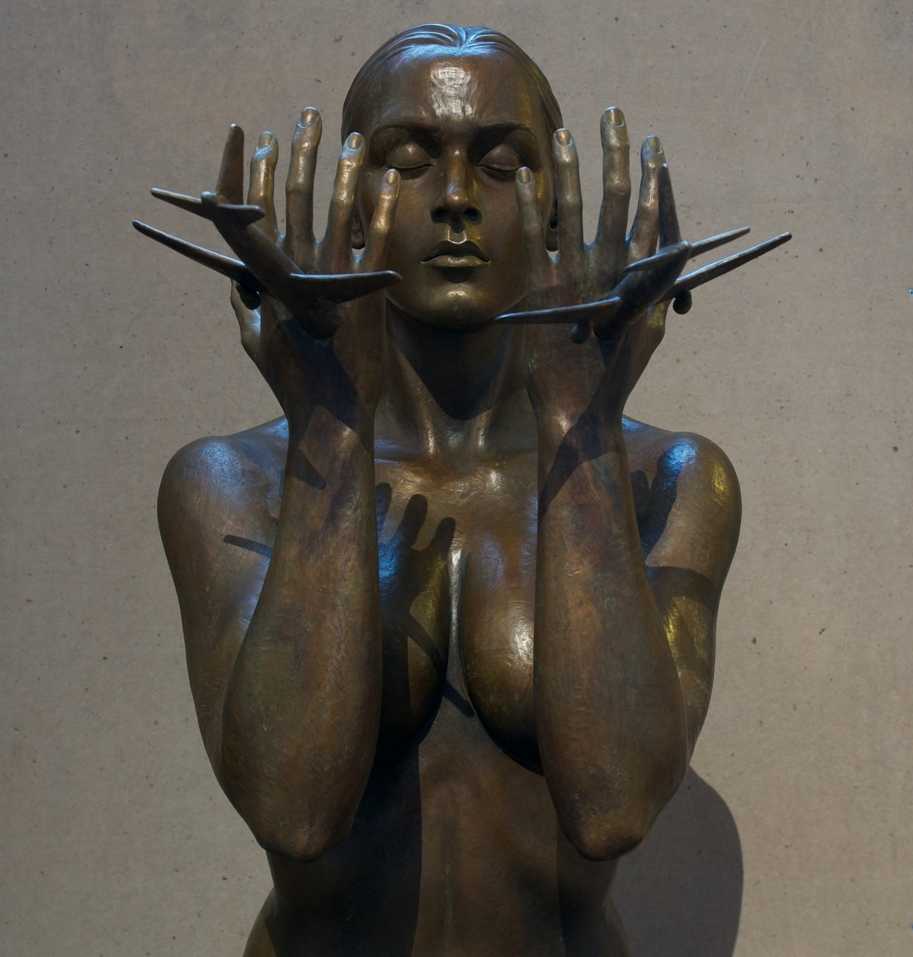 Why are her eyes closed? Why are her palms turned inward? The figure seems to possess superhuman power, stopping the jet-bombs with her hands.

But this sculpture is not a cartoon fantasy; it is a memorial that invites contemplation and fills the viewer with comfort, remembrance and inspiration. Perhaps her eyes are closed in prayer, and her palms are turned inward to concentrate her inner strength.

Meredith Bergmann is the New York City sculptor, poet and feminist who created this extremely moving and powerful memorial to the September 11th attacks. Ms. writer Mary Meriam caught up with her to talk about her work.

Mary Meriam: Is this sculpture an expression of your feminism? If so, how?

Meredith Bergmann: Yes, it is. Early in 2001, when the Taliban dynamited the two Bamiyan Buddha sculptures, I was appalled, but it seemed to be a distant atrocity. When I read about what they were doing to their women, the evil seemed to come closer. When New York was attacked I was shocked, horrified and very angry. I’d been thinking about the Houris, the virgins who were supposed to be waiting to greet and serve the terrorists in Paradise, and what a travesty that idea made of all that is truly feminine. I imagined them being greeted by this woman instead. I felt she should be absorbing and surviving the attack, wounded but alive, unlike the disintegrated Buddhas.

So many contemporary memorials are abstract. Why did you choose a figurative memorial?

It is important, I think, to see 9/11 commemorated with a figurative rather than an abstract sculpture, as representational art is more defiant of the ideology that informed the attacks. At that time, I felt defiantly determined to make as non-Taliban a sculpture as possible: first of all, a nude woman from the tradition of the allegorical female nude, representing New York City as young and strong and alert—even tough.

Why is the figure nude?

I made the figure a female nude because in our tradition descending from ancient Athens the female figure has represented the most life-giving, nurturing and inspirational forces we can imagine. This figure’s nudity is chaste, and it reveals both her strength and her vulnerability, as our open, democratic, inclusive society (at least in its ideals) is both strong and vulnerable.

Where can we see the sculpture?

It’s permanently installed in New York City’s Cathedral Church of St. John the Divine, on a pedestal with glass sides that will hold fragments of the Twin Towers. As an artist who has traveled widely to draw inspiration from art in cathedrals, this commission means a great deal to me. I was able to draw on the long tradition of reliquaries—beautiful containers made of metal and crystal, often shaped like miniature buildings—that were crafted to preserve and exhibit pieces of the bodies or belongings of heroes or saints that could teach profound lessons, boost the power of prayers and sometimes work miracles.

This reliquary pedestal is shaped like a building, too: The beveled corners and angled top are based on Minoru Yamasaki’s design for the World Trade Towers. Inside are interconnected pieces of metal, concrete and wood from some kind of flooring or structural wall–and some shredded magenta fabric from some kind of lingerie, still bearing a label from Victoria’s Secret, size Small. There was a Victoria’s Secret store on the World Trade Center concourse, and the garment may have lain there on a shelf when the whole building came down on it. For me, as a counterpoint to my sculpture, this shred is a terribly poignant reminder that so much that is intimate was exposed, so much that is life-affirming was killed, so much that is instinctive was attacked.

Mary Meriam advocates for the right of women to love each other in their poetry and art, and strives to give their work a place at the table. She writes about and publishes such work in the journal she founded, Lavender Review, at the press she cofounded, Headmistress Press, and at Ms. magazine, The Critical Flame, and The Gay & Lesbian Review. Her poetry collections, The Countess of Flatbroke, The Poet's Zodiac, The Lillian Trilogy, and Lady of the Moon, honor a cosmos of strong, creative women. Her latest collection, My Girl's Green Jacket, was published in 2018, and her poems have appeared recently in Poetry, Prelude, and Subtropics.

We Heart: ArtActivistBarbie Taking on Patriarchy in the Art World

The Ms. Q&A With Ani DiFranco: “You Have License To Be All the Aspects of Yourself and To Be Unashamed of Them”
Why Women Need the Paycheck Fairness Act
Tina Tchen Makes the Economic Case for Investing in Care Infrastructure and Talks Violence Against Asian Women