Are You A #Feministsuperhero? - Ms. Magazine
Skip to content 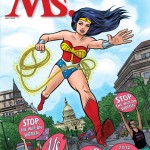 Last week, Ms. posted a “Question of the Day” on Twitter that asked followers “What would be your power(s) if you were a feminist superhero?” The response has been tremendous: Hundreds have replied to the question with their own wished-for feminist superhero power, and retweeted others’. Responses range from serious to humorous to awe-inspiring. People even started hashtagging #feministsuperhero so it could start trending.

So in honor of our 40th Anniversary issue that goes on newsstands today, we want to say thank you to our fans, friends and followers–thank you for supporting us and for all being feminist superheroes!

Below is a compilation of just some of the responses that we’ve received.