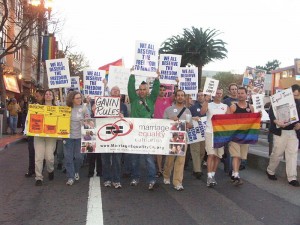 Though one would think that by this point all Americans would be enjoying equal civil rights, marriage equality continues to be a divisive point of contention.

Same-sex marriage first became a reality in the U.S. in Massachusetts in 2004, and in subsequent years New York, Connecticut, Iowa, New Hampshire, Vermont and Washington, D.C., all passed laws allowing all couples to marry regardless of gender. Efforts were put forth to legalize same-sex marriage in additional states over the years but were unsuccessful, as was the case with Proposition 8 in California in the 2008 election (the case is now at the Supreme Court where it may or may not be reviewed).

President Obama’s endorsement of same-sex marriage this past May has made this election season particularly interesting. Anti-gay and anti-human-rights groups have put huge sums of money and resources into campaigns to defeat same-sex marriage initiatives on the ballots in Maine, Maryland and Washington, and have shown ardent support for a total ban on same-sex marriage on the Minnesota ballot. However, marriage equality advocates have risen to the challenge and carried forward the momentum created by the president’s endorsement. Campaigns such as The FOUR 2012, which puts forth pro-marriage-equality content from celebrities and artists daily, are working to persuade voters to take a stand for same-sex marriage in the four states with marriage ballot initiatives.

As The Four states in its mission statement, “We’re fighting for love, not against it.” If you believe everyone should be able to marry the person they love and you live in Maine, Maryland, Minnesota or Washington, you have this power this November to create a big step forward for marriage equality in the United States. Here’s a rundown on those initiatives:

Question 1 would overturn the measure passed in 2009 which banned same-sex marriage in the state of Maine. Notable supporters of this measure include the ACLU of Maine, Maine Education Association and Catholics for Marriage Equality Maine. The language on the ballot reads, “Do you want to allow the State of Maine to issue marriage licenses to same-sex couples?”

Question 6 is a referendum on the Civil Marriage Protection Act. If passed, same-sex couples in Maryland would be able to obtain a civil marriage license starting on January 1, 2013. The measure also states that clergy will not be required to perform any marriage ceremony that contradicts their religious beliefs, and confirms that each religion may maintain its own theological doctrine determining who may marry within that faith. Additionally, no religious institution will be required to provide goods, services or benefits for any celebration or purpose related to a marriage that violates its religious beliefs.

If passed, this constitutional amendment would define marriage as being only a union between one man and one woman, though it may leave open the possibility of civil unions for same-sex couples. Opposition to this amendment comes from the likes of  Gov. Mark Dayton (D), the Minnesota Association for Professional Employees and the Unitarian Universalist Association of Congregations. Additionally, LGBT advocates launched the It’s Personal to Me Campaign, which puts a face to the fight for marriage equality in Minnesota and attacks the idea that same-sex marriage is anti-family or anti-marriage. A “no” vote on this amendment means that same-sex marriage will not be banned in Minnesota.

This referendum, if passed, would approve Washington’s new marriage-equality law. The referendum also states that laws utilizing gender-specific titles such as husband or wife include same-sex couples as well. As does Question 6 on the Maryland ballot, Referendum 74 protects religious freedom: The measure would not require religious clergy from having to perform marriage ceremonies that contradict their religious beliefs.