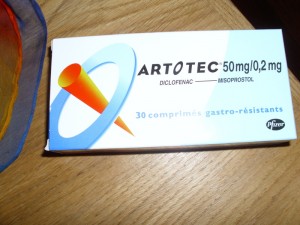 Nothing could stop the ship of Women on Waves, not even the Moroccan navy.

In the late afternoon of October 4, after Moroccan police and local authorities had shut down the harbor of Smir, the Dutch abortion activists Women on Waves revealed that the ship they had sent to Morocco to provide abortion pills in international waters was already inside the port. The Women on Waves land crew and the activists of M.A.L.I. (Mouvement alternatif pour les libertés individuelles), joined by Dutch MP Liesbeth van Tongeren, led journalists to the locale of the ship, but were prevented from nearing it by Moroccan authorities. The captains on the vessel then raised a huge banner of the Moroccan safe abortion hotline number (0633234333), sounded their horn and sailed around the closed port.

Moroccan police boarded the ship and searched it completely. A marine ship then escorted the ship out of the harbor.

Even though the ship was forced to leave the harbor, Women on Waves and M.A.L.I. succeeded in their mission to let women know about the availability of the abortion pill Misoprostol, sold under the brand name Artotec in Morocco, and to open political debate on liberalizing the nation’s restrictive abortion law. According to Women on Waves, hundreds of women have already called the hotline.

Women on Waves and M.A.L.I. will hold a press conference on Monday, October 8, at the Moroccan Association of Human Rights in Rabat to review their action in Smir Harbor. The groups will also charge the Moroccan government with violating their freedom of expression, as guaranteed in the nation’s constitution. For more information: Women on Waves: +212638926511; M.A.L.I.: +21261017742