The Truth About Pink and Blue Brains - Ms. Magazine
Skip to content 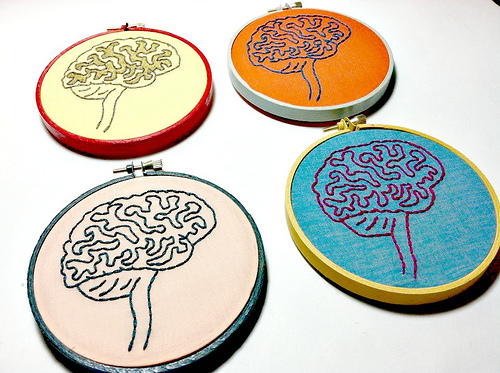 I loathe to weigh in on the “war on men” conversation, but … alas.

While one can use both logic and data to poke gaping holes in Suzanne Venker’s argument that women need to surrender to their femininity and let men think that they’re in charge if they ever want to get married, I just want to point out one thing–one endlessly repeated thing–that she gets very, very wrong.

Venker claims that there has “been an explosion of brain research” that proves that men and women have different brains. This research, she claims, shows that men are loners who like to hunt and build things and women are nurturers who like to talk and take care of people.

This is false on two fronts.

First, she’s wrong about the brain research.  The books and articles claiming that there are “pink” and “blue” brains are not consistent with existing research.  (They are out there because people can make a lot of money by confirming other people’s biases.)

What does the research say?

It’s true that scientists have documented a number of small, average sex differences in brain anatomy, composition and function, as well as differences in size and tissue ratios. (Other differences, such as the size of the corpus callosum [PDF] and lateralization–whether one sex uses one side of their brain more than the other–have proven to be wrong [PDF].)

So scientists do find some differences, but they have largely failed to link these to differences in men’s and women’s observed emotions, cognition or behavior. That is, we’ve found some differences, but we have no proof that they translate into anything. Moreover, new research suggests that differences we observe may be designed not to create differences between men and women but to reduce them. The brain may have two strategies for achieving the same outcome, or one difference may compensate for another. (For more, see Brain Gender by Melissa Hines.)

That’s one reason why Venker is wrong.

The second reason is even more damning. Most of the research attempting to explain gender difference assumes that there differences to explain.  In fact, meta-analyses aimed at summarizing the literature on human sex differences and similarities in traits, personality, cognitive abilities, sexuality, temperament, and motor skills offer better evidence for similarity than difference. On the vast majoity of traits, men and women overlap tremendously.

The truth is, men aren’t loners and women aren’t talkers. Venker assumes the stereotypes and counts on her readers to agree that they are true, but the data doesn’t back her up.

Two excellent books summarize the debates over gender and neuroscience. Cordelia Fine’s Delusions of Gender is great for a beginner; she’s funny and you’ll learn a lot. Rebecca Jordan-Young’s Brain Storm is great for someone who wants an intermediate-to-advanced introduction to these issues. Her book is downright brilliant. I highly recommend both.