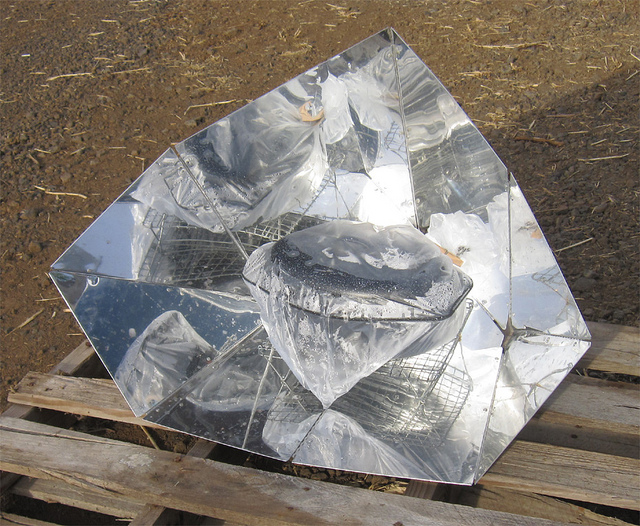 The author, a board member of Jewish World Watch–which fights genocide and mass atrocities worldwide–is currently at the Farchana refugee camp in eastern Chad, home to approximately 25,000 Darfuri refugees. Along with her is Janice Kamenir-Reznik, JWW’s cofounder and president, as they make a site visit to the JWW Solar Cooker Project.

When we at Jewish World Watch started the Solar Cooker Project for Darfuri refugee women in Chad seven years ago, our main motivation was to protect the women who were often raped and brutalized when they left the refugee camp to collect firewood. A secondary, almost equally important goal, was to create a women’s empowerment project.

We trained women to make the cookers and then taught some of them to become trainers; they learned a skill and were paid. We hoped to create a project which became theirs–a project which was not just a way to earn money but also gave them a sense of purpose. These women had lost everything: their husbands, homes and some or all of their children. We knew we could never undo the devastation that had been done to them but we wanted to prevent further physical and emotional damage and to provide them with work that would help them re-build their lives.

The project in the three original camps seems to have achieved that by allowing the women to take ownership of the Solar Cooker Project. They have created an environment where they can meet to talk and exchange ideas, along with participating in the decision making. They understand that the project is not provided to them, but rather they have been invited in to create something for themselves.

These projects take time and vision to evolve. Trust comes slowly. For someone who has been victimized, there is an inherent distrust of anyone who is seen as having control over their life and well-being. We met some of the women who have been trainers and some who are using the cookers. It was clear that while the project is well-organized and well-staffed–albeit by all men (it is very hard to find women to work in these dangerous and isolated communities)–something was missing. The women clearly found the cookers to be of benefit and expressed the desire for additional cookers for themselves and their friends, but they had not yet developed a sense of ownership of the project.

At first in the meeting they were hesitant to speak up, other than to thank us for the project. Finally, after some prodding, the women slowly and tentatively expressed some of things that they felt would improve the project. Annie–the regional program operations manager for the NGO Cord, which is JWW’s new partner in the Farchana solar cooker project–listened for two hours, taking notes and gently assuring them that they were being heard. She is experienced at working in countries such as Chad, Burundi and South Sudan where men are the decision-makers, and she maneuvers through those worlds with determination and grace.

When we returned to the office, Annie coached the staff into understanding that it is not enough just to do what is to expected–to follow the guidelines. She gently congratulated them for building a strong base from which to go forward, but being well-organized was not enough. What was missing was listening and reflecting, and then reflecting back to the women. She suggested that making the women know that they were being heard, and that what they had said was being carefully considered, might bring about a greater sense of ownership and, with that, greater success for the project.

We spent quite a bit of time going over the women’s requests, trying to decide which ones the project could accept, so that they could know that they were being taken very seriously. We discussed ways of involving them in the decision-making and strategies for helping them view the solar cooker workshop as a place of camaraderie and sisterhood. Annie said that the women needed to be at the heart of the project–only then would the project be in their hearts.

On the Solar Cooker Project T-shirts here in Farchana it says “Protecting and Empowering the Women of Darfur.” With Annie as a role-model to the women and her support of the Cord team, we have no doubt that great progress will be made towards that goal.

Diana Buckhantz is a Jewish World Watch board member.