My Month With a Gun: Week One - Ms. Magazine
Skip to content

My hands are shaking; my adrenaline is surging.

No, it’s not from the latte I just inhaled or because this is the first time in two years I’ve been in a Starbucks since declaring a boycott on its open-carry gun policy.

What’s got me jittery this morning is the 9mm Glock that’s holstered on my hip. Me, lead gun policy protester at the 2010 Starbuck’s shareholder meeting. Me, a board member of the Brady Campaign. Me, the author of a book about the impact of gun violence, Beyond the Bullet.

Yes, I bought a handgun and will carry it everywhere I go over the next 30 days. I have four rules: Carry it with me at all times, follow the laws of my state, only do what is minimally required for permits, licensing, purchasing and carrying, and finally be prepared to use it for protecting myself at home or in public.

I decided to find out.

Getting the permit to carry a concealed weapon was simple. I filled out a form, had my fingerprints taken for a background check and paid $56.50. No training required. It took far longer to get my dog a license.

I started my 30-day gun trial with a little window-shopping. I visited a gun show and two gun dealers. I ended up buying a Glock 9mm handgun from Tony, a gun dealer four miles from my house. I settled on this model because it was a smallish gun and because Tony recommended it for my stated purposes of protecting myself and my home.

Tony told me a Glock doesn’t have an external safety feature, so when I got home and opened the box and saw the magazine in the gun I freaked. I was too scared to try and eject it as thoughts flooded my mind of me accidentally shooting the gun and a bullet hitting my son in the house or rupturing the gas tank of my car, followed by an earth-shaking explosion. This was the first time my hands shook from the adrenaline surge and the first time I questioned the wisdom of this 30-day experiment.

I needed help. I drove to where a police officer had pulled over another driver. Now, writing this, I realize that rolling up on an on-duty cop with a handgun in tow might not have been fully thought through.

I told him I just bought a gun, had no clue how to use it. I asked him to make sure there were no bullets in the magazine or chamber. He took the magazine out and cleared the chamber. He assured me it was empty and showed me how to look. Then he told me how great the gun was and how he had one just like it.

The cop thought I was an idiot and suggested I take a class. But up to that point I’d done nothing wrong, nothing illegal.

So here I sit at Starbucks, and the irony couldn’t be thicker. On March 12, 2010, I was surrounded by big hairy men with guns on their hips, yelling at me as I led a protest against Starbuck’s gun policy. Today, I’m surrounded by five-year-old boys sitting with their moms at the next table. Now I’m the one with a gun on her hip. The gun makes me more fearful than I could have imagined.

In some way, I feel a certain vindication. I was right to protest Starbucks policy. Today, they have a woman with absolutely no firearms training and a Glock on her hip sitting within arm’s reach of small children, her hands shaking and adrenaline surging.

Photo of the author by Dave Yewman

Heidi Yewman is a Vancouver author whose 2009 book Beyond the Bullet: Personal Stories of Gun Violence Aftermath profiles 19 people forever altered by the impact of gun violence. Yewman is the Washington state president of the Million Mom March and a board member of the Brady Campaign. She is a 1986 graduate of Columbine High School.

Are Republicans Afraid of Young Voters? 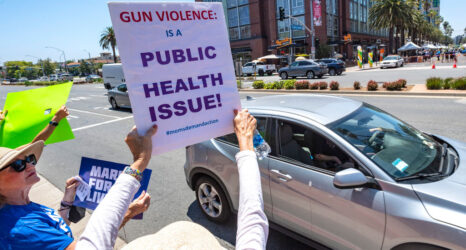