The women’s movement is a diverse, complex, multifaceted one with many differences of opinion and ways of thinking. Although most mainstream feminists generally agree about issues—such as being pro-choice or against genital cutting—there are several controversial issues about which no one general consensus has formed. This article on feminist debates is half explanatory, half experiment: After giving each side of an issue equal fair time, there will be a poll to ask you, dear readers, what you think.

Anti-porn feminist Robert Jensen has written extensively on the topic. In his book, Getting Off: Pornography and the End of Masculinity, he says,

People routinely assume that pornography is such a difficult and divisive issue because it’s about sex. In fact, this culture struggles unsuccessfully with pornography because it is about men’s cruelty to women, and the pleasure men sometimes take in that cruelty. And that is much more difficult for people—men and women—to face.

Pornography is an apparatus of the patriarchy because of the way it is aimed at male consumers. The women who participate in pornography deserve dignity and respect, but are still engaging in acts that perpetuate ideas about male domination over women and place an emphasis on male pleasure over female pleasure, even in non-heterosexual videos. Performing in pornography turns women into sex objects and is simply an example of how deeply ingrained and coercive patriarchal oppression is today. As feminist and law professor Catharine MacKinnon says, “Pornography is a harm of male supremacy made difficult to see because of its pervasiveness, potency and, principally, because of its success in making the world a pornographic place.”

The problems within pornography stem from larger patriarchal frameworks, so while the industry may require drastic improvement, pornography cannot be blamed for sexism and violence—particularly when there are institutionalized policies that repeatedly shame and debase the female body. Rather than blame pornography or attempt to censor it, we can think critically about the way it is packaged and sold as a commodity for men rather than as a universally enjoyable and empowering method of exploring sexuality. In order to reform the pornography industry, we must first work to destigmatize it, starting with accepting it as a legitimate method of employment and sexual enjoyment for women.

So where on the feminist spectrum do you fall in terms of pornography? Do you identify as anti-porn, pro-porn or somewhere in between? Leave your comments and take our survey to choose the opinion with which you most identify.

Photo courtesy of B.D via CreativeCommons 2.0 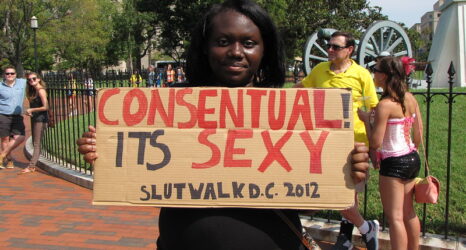