Let’s not mince words. The Supreme Court’s decision on Thursday to strike down a Massachusetts buffer zone law has significantly hindered the government’s ability to protect women exercising their constitutionally protected right to seek abortion and reproductive health care, and has endangered doctors and health care workers providing these critical medical services.

The Massachusetts law established a 35-foot buffer zone around facilities that offer or perform abortions, preventing individuals from knowingly entering or remaining within the buffer zone, with exceptions made for those attempting to access the facility’s services and for employees of the facility and other public officials who are “acting within the scope of their employment.”

The ruling in McCullen v. Coakley concluded that the 35-foot buffer zone violated the First Amendment by restricting “access to ‘public ways’ and ‘sidewalks’,”  preventing petitioners from peacefully conversing and distributing literature, and thus burdened “substantially more speech than is necessary to further the government’s legitimate interests.”

Petitioners are not protestors. They seek not merely to express their opposition to abor­tion, but to inform women of various alternatives and to provide help in pursuing them.

Really? The Supreme Court’s decision completely ignored the reason for the Massachusetts law: The 35-foot buffer zone was enacted following the murder of two clinic receptionists, Shannon Lowney, 25, and Leanne Nichols, 38, by anti-abortion extremist John Salvi at two separate clinics in Brookline. Five other people were wounded in the 1994 attacks.  As Eleanor Smeal, president of the Feminist Majority Foundation (FMF), wrote last week,

The Court wants to believe that these anti-abortion protestors are merely ‘sidewalk counselors’, but let us not forget that initially Scott Roeder, who murdered Dr. George Tiller, acted as a ‘sidewalk counselor’ to gain information about vulnerabilities of the clinic; Paul Hill, who killed Dr. John Bayard Britton and his escort, James Barrett, outside a Pensacola clinic was a ‘sidewalk counselor’ first. Hill was mistakenly thought to be handing them a leaflet. Instead he delivered lethal bullets..

The Court ignored the history and prevalence of violence against abortion providers throughout the United States. Nearly one-quarter of clinics in 2010 reported being impacted by severe violence, according to a survey conducted by the Feminist Majority Foundation (FMF), the last year for which data is available.  Additionally, the survey found that clinics experiencing intimidation or so-called “peaceful” forms of protesting—such as targeted pamphleteering and postering—are nearly “four times more likely to experience violence than those not experiencing intimidation tactics.”  And even if anti-abortion protestors do not directly physically harm individuals seeking reproductive health care, a Florida doctor has testified that protestors cause added stress for patients, who then require increased sedation.

About one-third of clinics in this country are protected by buffer zones—and these zones have been shown to significantly reduce anti-choice violence. A survey conducted by the National Abortion Federation (NAF) found that buffer zones reduced criminal activity for over half of respondents that had such protections, and FMF surveys have found that clinics with buffer zones report significantly less violence than clinics without buffer zones. Similarly, about 75 percent of NAF respondents said the buffer zone “improved patient and staff access to the facilities.”  Buffer zones also give law enforcement better tools with which to control unruly and dangerous protestors. FMF research has shown a significant positive correlation between stronger law enforcement response and lower levels of violence around abortion clinics.

Despite the efforts of Justice Antonin Scalia, the Court’s decision did not overturn the 2000 Supreme Court ruling in Hill v. Colorado, in which the justices ruled in favor of a Colorado floating buffer zone law. The floating buffer zone in Colorado creates a 8-foot bubble around individuals attempting to access health care facilities. The Supreme Court’s ruling also demonstrated a preference for court-ordered buffer zones. However, injunctions are only issued on a case-by-case basis and require severe harassment and threats of violence or actual violence to occur before protection will be provided.

Health-care providers and the women seeking reproductive health care need our support.  Without clinics, there is no choice for women.

Photo of anti-choice protestors outside of the Ambulatory Surgery Center in Brooklyn, courtesy of VJnet via Creative Commons.

Margaret Nickens is a senior at Brown University and an intern with Ms. magazine. Check out her blog or follow her on Twitter.

Margaret Nickens is a senior at Brown University and an intern with Ms. magazine. Follow her on Twitter. 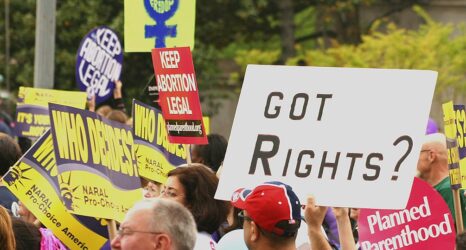